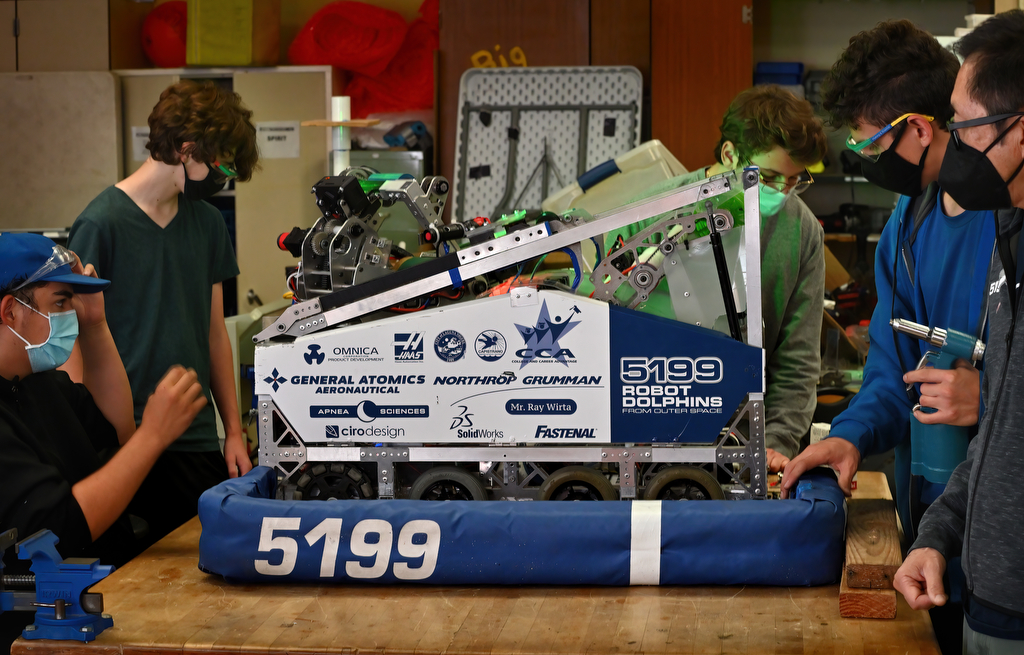 On an eraser board above the riot of equipment that fills the workshop for Robotics Team 5199, the Robot Dolphins from Outer Space, is a message written somewhat ominously in big letters that reads “Two days until competition.”

And beneath that, another message reads “54 days to Christmas.”

Goals and deadlines and randomness — in other words, high school.

Through the flurry of action amid the power tools, spare parts, and scattered laptops, there is unity of purpose and the belief that somehow from the mayhem, a battle-ready bot will emerge, as it always does.

This year, for the first time, the district-wide team representing the Capistrano Unified School District will play host to the Beach Blitz, touted as Southern California’s premiere off-season robotics event.

The competition, which will feature 36 teams from as far away as Idaho and Hawaii, is Friday through Sunday, November 5 to 7, with competition on Saturday and Sunday at Aliso Niguel High School. The event is restricted to team members, parents, and mentors.

Robotics has become a mainstay in Science, Technology, Engineering, and Math, or STEM education, from high school down through primary education. Robotics combines engineering, building, programming and strategy.

Each year, students from across the country and internationally build robots to compete in games designed by FIRST (For Inspiration and Recognition of Science and Technology). In the competition, the robots fire balls at targets and climb walls, and try to block each other from succeeding. Typically teams of three face off in games.

In their final event of the year, Team 5199 is hoping for big things from Nessie, their robot, in her last competitive ride.

Nessie has been the main competition bot for nearly two years, including during the COVID-19 altered 2020 campaign, when live competitions were cancelled.

“We’ve been living with her a long time,” Jung said. He added that tweaks are still being made, like new vision tracking software for the bot’s shooter.

Before the abrupt end to the 2020 season, Team 5199 was a finalist in a regional event in Del Mar in March and was flying high just before schools were shuttered by Gov. Gavin Newsom’s Executive Order that residents shelter in place.

Live action was replaced by virtual events in which schools turned in videos of their bots performing skills, but it’s not the same.

As team driver Vaughn Schaaf explained, “Online didn’t feel the same. I could re-record the video as many times as we wanted before sending it in.”

Virtually, at the FIRST Robotics Competition that replaced the traditional World Championships at Minute Maid Park in Houston in April, Team 5199 took second place in the 30-team Argon division and 18th in all divisions, which included 1,412 teams.

This fall, in live competition, Team 5199 was as high as third in the Tidal Tumble in Ventura and reached the semifinals in the Battle at the Border.

“This is a serious off season,” said senior team president Morganne Malloy, who sees the season as a kind of redemption for what could have been.

She is looking forward to the adrenaline rush of live competition.

“It’s very stressful, but running around is what makes it exciting,” she said, “especially if  something breaks.”

Often it seems more like “when” than “if” things break for competing robots.

The new FIRST season kicks off on Jan. 8. Each year, there is a new theme for the competition, requiring different skills for the robots. And each year, teams build and assemble entirely new bots to compete.

In advance of the big live-streamed “reveal” for which teams gather in watch parties, FIRST sends out teaser videos.

“We have a strategy team trying to guess what the game will be,” Malloy said.

Themes have ranged from medieval castle assaults to “Star Wars.”

This year, the game is called Rapid React.

Malloy and her teammates are already looking forward to the kickoff. The team gathers around 8 a.m. and often stay until midnight with strategy and design sessions.

This year’s robot will have a big legacy to live up to on the heels of predecessors Nessie, Kraken, Leviathan, Tsunami and Poseidon.

If the team succeeds, the Robot Dolphins hope to place a new blue banner on their wall at Capistrano Valley High School.

Visit CUSDInsider.org for an update on the Beach Blitz competition.