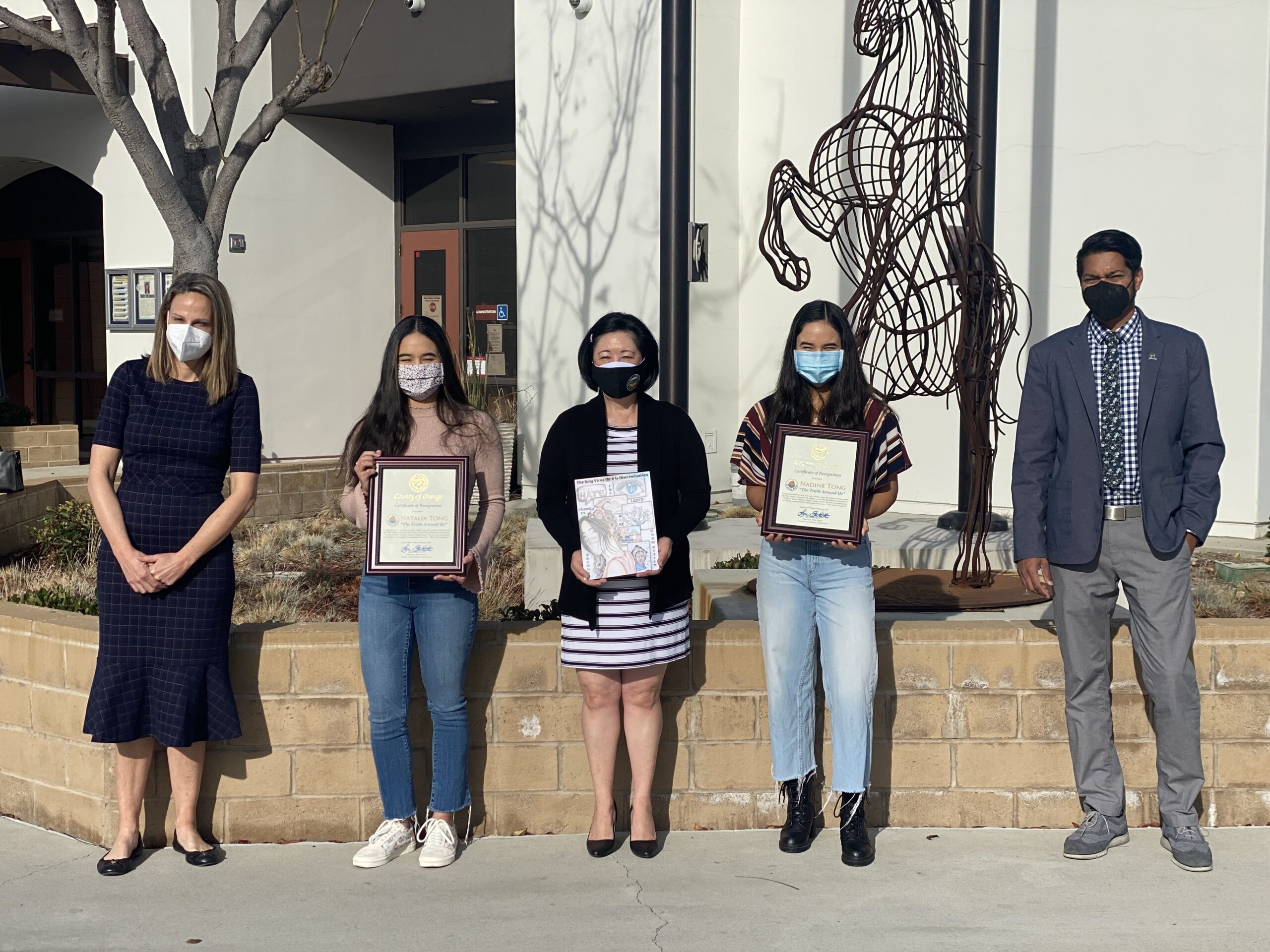 A masked young Asian woman looks over her left shoulder at the viewer.

Under a headline that reads, “The Only Virus Here is Discrimination,” is an array of images displaying aspects of racial diversity, unity and acceptance. They depict Black and white hands making a heart symbol, a peace sign, BLM, LGBTQ+, Unidos US, international landmarks, a tree whose leaves are the flags of nations, a fractured Martin Luther King Jr. portrait.

This is the poster, slightly larger than 8-by-11 letter size, by twins Natalia and Nadine Tong, that emerged as one of five regional district winners among 150 entries in the Orange County Human Relations Commission’s “To Know Better” anti-hate campaign.

The 17-year-old seniors from San Juan Hills High won $5,000 for their school to use toward unity and anti-hate campaigns.

Although not a self-portrait, “It kind of portrayed us,” said Nadine Tong of the girl on the poster.

Originally, the plan had been to have an Asian and Latino girl embracing, which would have had a dual meaning of not only diversity but melding. The Tong sisters are of Chinese-Cuban ancestry and thus embody and live the notion of diversity and unity.

“We like how we could portray a lot in one piece,” Nadine said of the concept on which the sisters eventually settled.

Bartlett was impressed enough with the artwork that she had it blown up and brought it with her to display at the next meeting of the Orange County Board of Supervisors.

In unveiling the contest, the OC Human Relations Commission asked students to “create an inspiring campaign to stop hateful vibes and wrongful bias fueled by the pandemic.”

The other winning entries crossed a wide array of messages and media:

In its call for submissions, the commission wrote, “The time is now, and the opportunity is yours to encourage your fellow Orange County citizens to do better together.”

In introducing their piece for the contest, the Tongs wrote, “instead of dividing us further, let’s build the bridges that can connect us despite our differences; let’s fight against the racial prejudice that harms us; let us become the voice of change that encompasses the message of unity we want to see in our society, because the only unjust virus is discrimination.”

Reflecting on the contest, Bartlett said, “Life is stressful for kids and adults, so it’s appropriate to send the right messages about diversity. I think their message is on point.”

For the Tong sisters, collaborating is nothing new, although they didn’t always agree on everything.

“If I kind of had an idea and we disagreed, we kind of debated,” Nadine said, discussing the work while her sister was in another room interviewing for college.

Nadine said she and her sister alternated on the poster.

“I think my sister likes to color and I like to draw,” she said.

This was the first time the sisters had entered any kind of art contest.

“I was kind of scared to put it out there,” said Nadine, who views art as a hobby.

Nadine said her interest in drawing grew while she was a sophomore in honors English, when she made art to accompany assignments.

“My teacher has a lot of my drawings on his wall,” she said.

Her parents needn’t worry about the art bug stealing their children, however. Nadine said she and her sister are both hoping to attend Yale University and major in medicine, with Natalie aiming at neurosurgery and Nadine, cardiac surgery.

That would be apt: twin sisters with twin ambitions that are metaphors for the contest they just won. Solving and finding unity across the divides of race, hate, opportunity and societal will require repairing hearts and minds.