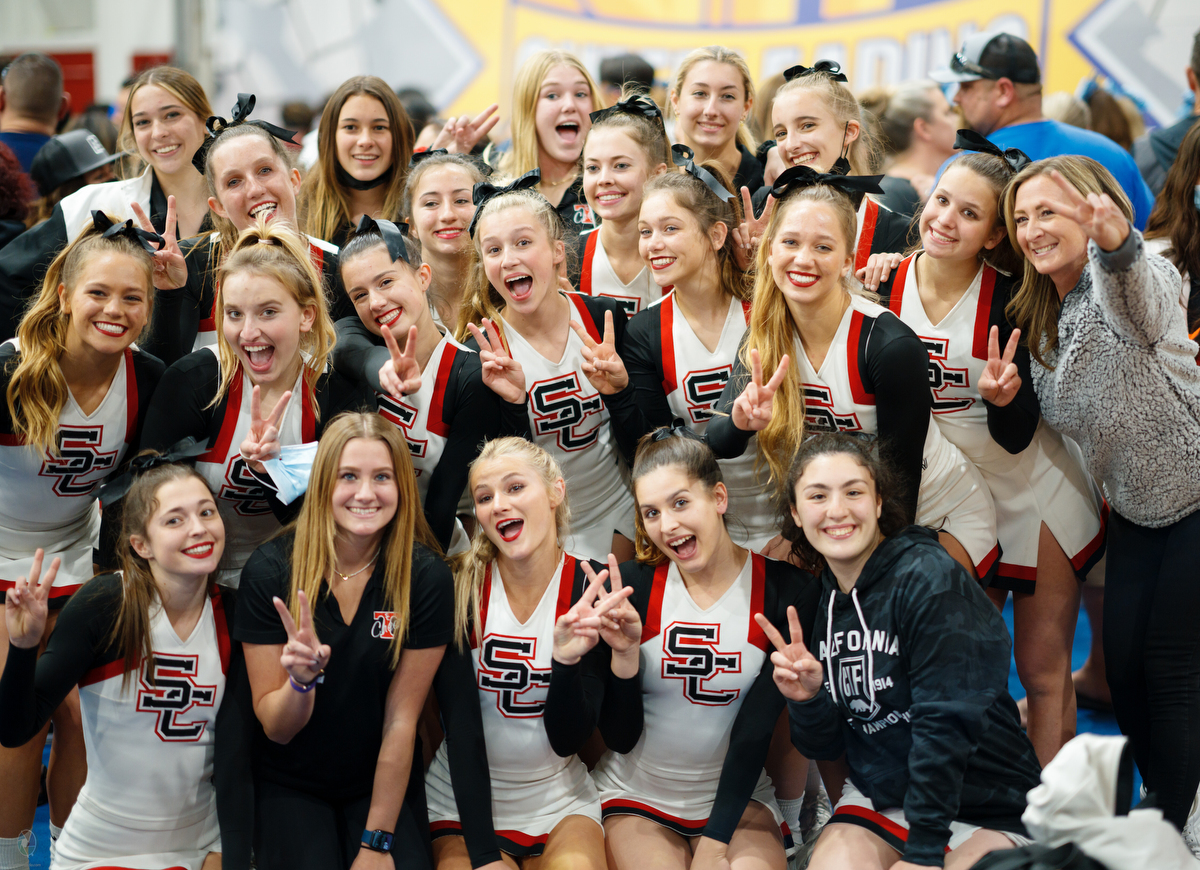 After overcoming a year of uncertainty due to the COVID-19 pandemic that limited practice and preparation time, and having to rely on virtual meetings to learn their routines, the 2022 San Clemente Tritons’ Competition Cheer squad overcame all odds to cap the best year in program history by achieving the CIF runner-up plaque in the inaugural CIF Regional Invitation (advanced division).

The program, which returned to life in 2018, peaked at the right time by making routine improvements and boosted practice intensity to establish a solid performance in the CIF Southern California regionals hosted at Downey High School on Feb. 19.

It didn’t come easy, though, and there was drama, to say the least.

The Tritons initially were left out of the podium. Los Alamitos took home the championship plaque, while Corona Centennial received the runner-up plaque. But after seeing an error in the scoring sheet, San Clemente head coach Ambrosia Smith-Stanco and the team met with the judges to point out the irregularity which showed a decimal point being put in the wrong place.

“We competed for the first Regional Invitational with CIF. Before the end of the competition as soon as you perform you get a deduction sheet. It shows you basically what your deductions were for your errors. So, we got that and our deductions were .25,” Smith-Stanco said.

Los Alamitos was listed as the winner and Corona Centennial as the runner-up. The scoresheet listed a 2.5 under deductions, a whole decimal point to the right.

“We went back and saw the judges, and they pulled all of the scores and then they confirmed that it was wrong, and by fixing that deduction error, it put us in the co-runner up spot,” said Smith-Stanco during a practice that took place in the multipurpose room in the Upper Campus of San Clemente High School.

“Awards had already been announced. They called us back in, announced to the rest of the teams that were still there that there was a scoring error, and that San Clemente was the runner-up,” Smith-Stanco said. “It was an awkward situation, definitely. CIF came out and send out an additional set of medals, and plaques and all of that good stuff after the fact because everything went back with the other schools.”

Prior to their Southern California Regional performance, the Tritons finished third in the Southern Section playoffs on Feb. 5, just behind perennial powerhouse Mater Dei and Corona Centennial.

“(Competition Cheer) season was insane,” said senior Julia Miranda, who participates in the Stunt and Sideline teams. “It was six months, Saturday morning practices, every day during the week, and commitment-wise out of a scale of 10, it was like eight or nine for sure.”

Miranda added that all of the bonding time helped to boost the team chemistry, and that there was collective time management to take care of homework and studies. The athletes would work on their computers while on the bus to competitions.

“We have a lot of student-athletes in this team and a few IB (accelerated certified program) students too as well,” Miranda said. “It’s a grind, I would say. We pursue things head on. We go with the flow. If we have a lot of homework, we use our time wisely.”

In addition to the success in state competitions, San Clemente High also placed second in the USA Regionals.

“The Competition team did great. It was our first year getting back to in-person competitions, and during the COVID-19 year everything was virtual,” Smith-Stanco said. “Everything that we did needed a plan — A, B, C and D — just depending on what the COVID-19 regulations may have been at that moment. So, it was planning times four for everything. It was intense, but the girls were super motivated, and that’s what kept us going.”

The team had to abide by local and district rules during the pandemic, which meant they could not travel out of state for the National competition in Orlando earlier this year, she said. The team began competing in November with overall scores in the mid-60s, but by the end the team was scoring around 89, Smith-Stanco said.

“They really pushed to increase the difficulty in their routine over the course of the season,” she said. “Where we ended, if that can be our starting point next year, it’s going to put us in a really competitive level. We’re going up against schools like Mater Dei who’ve won these multiple years in a row.”

In terms of hopes and expectations for the future of the Competitive Cheer program, Smith-Stanco is confident the team is headed in the right direction, and has high hopes for the upcoming class.

“They really did a good job this year showing themselves that they’re capable of a lot more than what they thought initially, and that’s what we saw in our score from the beginning of the season to the end,” she said. “I think we’re already looking good in terms of next year. It’s a runner-up CIF title, but it’s a CIF plaque that’s hanging up in the office, and we’re super proud of it. I think it’s just a start for us.”

In terms of the experience that led the team, there were a total of eight seniors, commanded by captains Shelby Reisender and Caroline Greene.