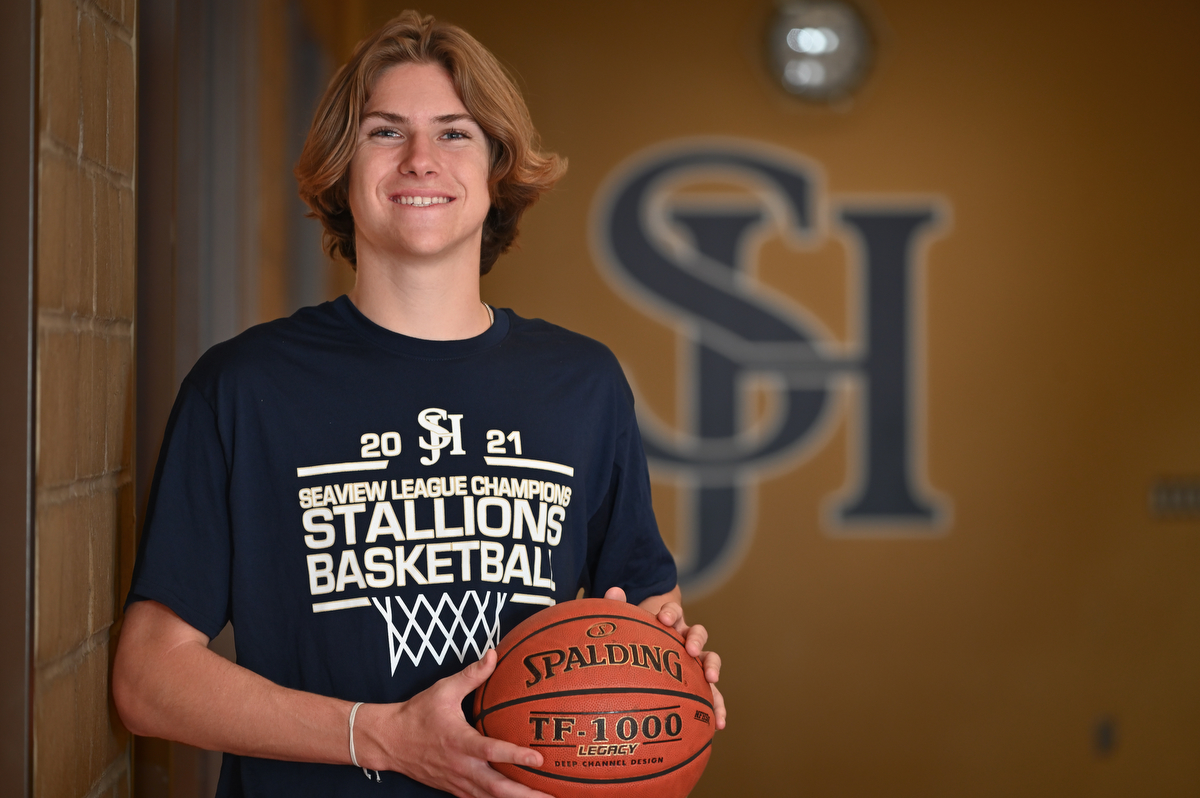 McFadden and teammate Mark Reichner, both four-year players and three-year starters on the Stallions’ varsity team, were named Co-CIF-SS Players of the Year of the Division 2A of the CIF Southern Section.

McFadden provided senior leadership on and off the court and contributed greatly to the Stallions’ 27-5 season, culminating with the CIF SS Division 2A championship – the first division title in school history.

“Before the buzzer went off, I was still in game mode,” McFadden said of the final seconds of the Stallions’ 59-49 victory over La Mirada in the championship game on Feb. 25. “But right as that buzzer went off, joy just hit my heart.’”

McFadden set school records for steals and rebounds in a season and rebounds for a career and was the team’s second leading scorer behind Reichner.

The senior’s most obvious attribute is his six-foot, seven-inch frame, which contributes to his strength as a rebounder and scorer, San Juan Hills coach Jason Efstathiou said.

But arguably, McFadden’s greatest strength is passing, the coach said.

“The good thing about having a guy like that is that not only is he our leading rebounder, but he gets the board and he can just get us right into our offense,” Efstathiou said. “This year, he still handled the ball for us in a lot of situations and still played the point at times. He’s fast. He sees the floor well. He just finds guys. He is really that guy who can do everything.”

Efstathiou points to one game in which McFadden delivered in the clutch, a 58-56 come-from-behind victory over rival Tesoro on Jan. 19, which appeared to be a catalyst for the team’s high-powered finish. The Stallions trailed by 14 early in the fourth quarter and were down 10 with just over two minutes remaining. San Juan Hills trailed by seven when McFadden made three consecutive steals, which the Stallions converted to a dunk, a layup and a game-tying three-pointer. The contest remained tied when Reichner hit game winning shot in the final seconds to give the Stallions a 58-56 victory. The victory kicked off the 10-game winning streak with the Stallions winning every game by double digits.

From the division championship, the Stallions advanced to the CIF state playoffs, but were knocked in the first game by Birmingham of Lake Balboa, 64-56. Still, by winning the Sea View League and the Division 2A championships, the Stallions accomplished two goals they had set before the season.

“It’s been a pretty awesome, amazing season,” McFadden said. “We were kind of disappointed how it turned out last season so we kind of had that extra fire in us.”

McFadden is not the only athlete in the family. His older brother, Vincent, played basketball at San Juan Hills in the 2013-14 and 2014-15 seasons and went on to graduate from the United States Military Academy at West Point. McFadden’s twin brother, Robert, has played roller hockey and ice hockey. McFadden is looking to play basketball at a four-year college but is open to first playing at a junior college.

“I’m going to enjoy my last few days of high school before I take the next steps into my future,” McFadden said.

After winning the Division 2A championship, Efstathiou said to the team, “This is forever. It’s like a dream come true.”

“We had a family of brothers and then our father figure (Efstathiou), our dad almost,” said McFadden. “It was just special.”