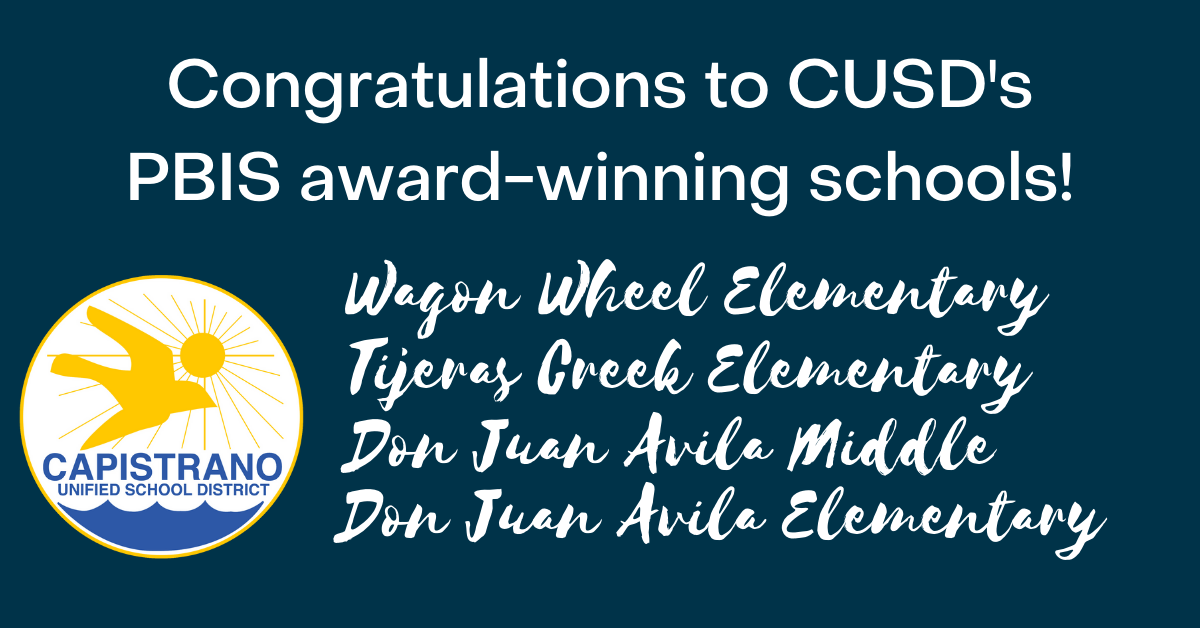 These Capistrano Unified School District schools are involved in efforts to promote good behavior among their students and help them become better citizens and stewards of their communities. This is done, in part, through programs offered by the California PBIS (Positive Behavior Intervention and Supports) coalition.

“Good behaviors go hand in hand with good academics,” said Principal Jean Grabowski of Wagon Wheel Elementary, which has seen measurable benefits in the five years the school has been involved with PBIS.

“We have found that a positive environment is conducive to learning,” Tijeras Creek Principal Diann Buckingham said.

Overall, 148 schools in the state earned Platinum recognition. Don Juan Avila Elementary School was one of 230 schools to earn Gold status, moving up from Silver with hopes of reaching the Platinum level this coming year.

The local schools will be formally recognized at the sixth annual California PBIS Conference in Sacramento, Sept. 13-15. More than 1,000 attendees are expected at the conference. The recognition system was launched in the state in 2015.

Capistrano Unified understands that helping students excel involves an understanding of the psychology of good behavior, socialization, empathy, and respect. Equally important is employing solutions to help children understand and solve disruptive behavior. Providing a framework to meet those goals is what PBIS is all about.

More broadly, PBIS is described as improving “social, emotional and academic outcomes for all students, including students with disabilities and students from underrepresented groups.”

According to Buckingham, the core values at Tijeras Creek are “respectful, responsible and kind.”

“We ask ourselves, ‘what does that look like?’” she said, from arrival at school, to the classroom, to the playground, and in common areas.

Actions as simple as being on time, seated, and ready for school are supported and rewarded.

“We’re focusing on the positive things students do,” Buckingham said.

“Kids will rise to high expectations,” Maxwell said, particularly when the emphasis is on reinforcing positive behavior rather than correcting the bad.

Grabowski says her school, which has won the top recognition twice in a row, has been working for five years to implement PBIS, which includes three tiers that escalate from schoolwide education on behavior and expectations, to focus on at-risk students and groups, to individual evaluation and counseling when needed.

The multiple tiers are important in tailoring teaching and aid beyond one-size-fits-all instruction.

The extra tiers “reteach those who need a little extra help,” she said.

Steven Long, school counselor at Don Juan Avila Elementary, said data show about 80 percent of students will understand and adopt behavior expectations the first time they are taught. The other 20 percent need to be retaught.

The key, according to Long, is to do that in a supportive and positive way.

At all the schools, referrals to the principal or guidance offices and suspensions have declined since adoption of the programs. There has also been increased classroom participation and academic performance.

Students earn Pride tickets for displaying positive characteristics, from being ready at the start of the school day, to showing responsibility, to exhibiting empathy for fellow students.

The tickets provide “extrinsic” rewards, Grabowski said. Tickets can be redeemed at the Mustang Mercantile for prizes that include fun pens, toys, notebooks, and even gift certificates.

Among the most popular rewards are experiences. Kids can reserve lunch tables for themselves and friends, or book exclusive use of a basketball court for a select group during recess.

“Those are really popular among the older kids,” Grabowski said.

At Tijeras Creek, Pawsitives are redeemed at the Tiger Store (run virtually last year due to the COVID-19 pandemic) for everything from stuffed animals to slime, purses, and Legos.

Fourth and fifth graders are able to enter the Tiger’s Den during lunch where they can play video games and foosball, sing karaoke, or take part in craft activities.

Don Juan Avila held raffles and rewarded students with free meals at local eateries and schoolwide recognition. This year, the school plans to reopen the Eagle Store with prizes for good behavior.

Across the district, implementing PBIS was complicated by the COVID-19 pandemic and the different education models schools adopted.

For that reason, PBIS awards were suspended with schools instead receiving “Community Cares” recognition.

“To keep it going during COVID-19 was not easy,” Buckingham said of maintaining the programs with the disruptions in schooling.

At Don Juan Avila Elementary, Long says the PBIS team will continue to “raise the profile of behavior expectation as a foundation,” to a positive and successful learning environment.

The National PBIS organization, a federal grant-funded group, grew out of studies in the 1980s that continue to resonate. Researchers from the University of Oregon had been working with children with behavioral disabilities before shifting to focus on schoolwide behavior. With passage of the Disabilities Act of 1997, a grant from the U.S. Department of Education was made to establish a national center on Positive Behavioral Interventions and Supports. Oregon won the opportunity to develop the PBIS Center.

The organization defines its approach as a “framework,” giving emphasis to process and approach, rather than specific curricula, interventions or practices.

Local educators are happy with the outcomes they have seen but say it takes teamwork.

At Tijeras Creek, Buckingham said, “We all buy into it. It takes everyone.’