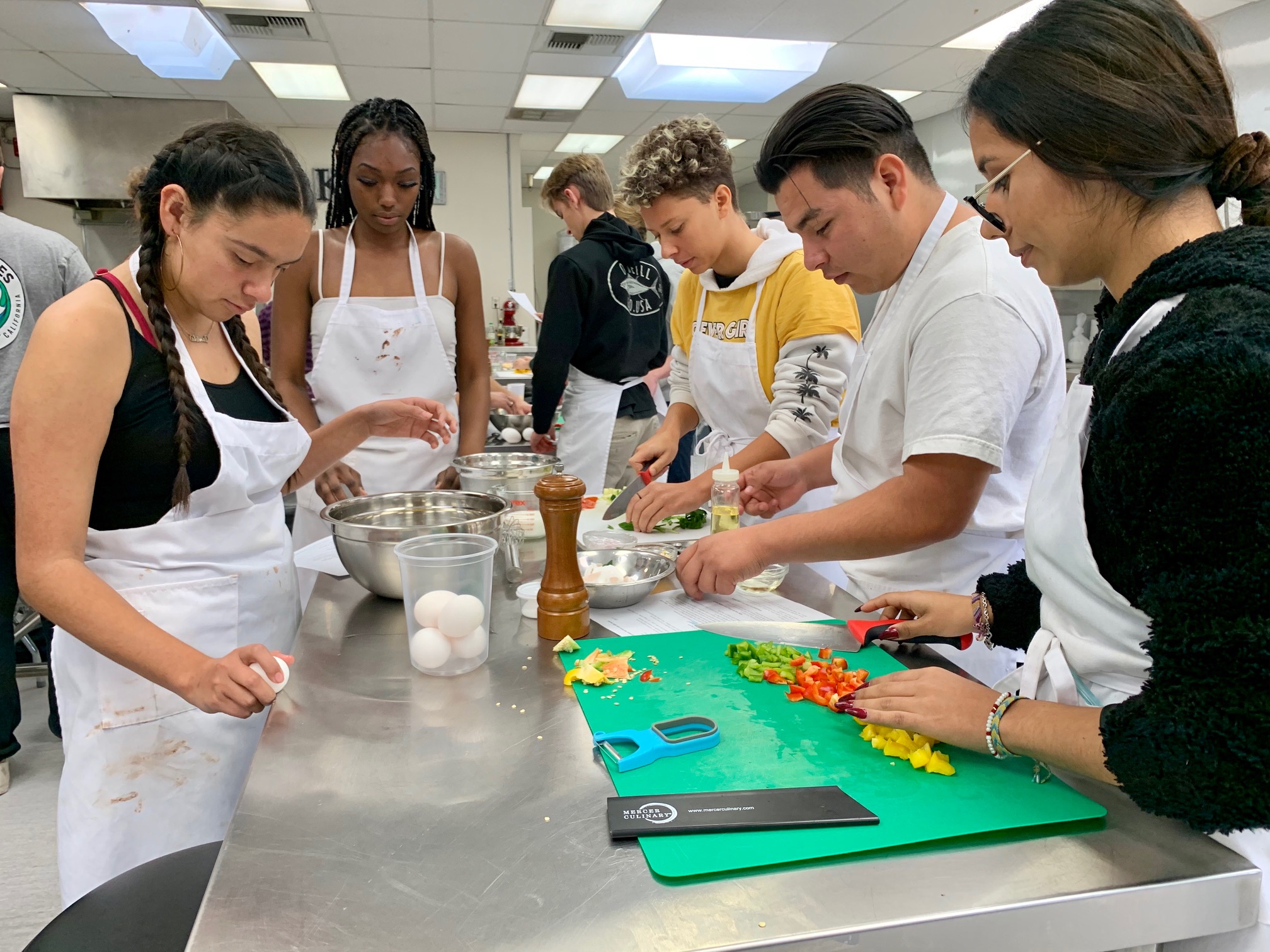 To say that the Intro to Culinary Arts class at San Clemente High School puts you on a track for a job in the culinary industry is an understatement.

Take former student Enzo Points, now 18, who took the class last year just as he was experiencing a spark and passion for cooking.

During a class tour of Laguna Cliffs Marriott Resort & Spa, it was mentioned that some summer jobs were opening up if anyone was interested.

Points jumped at the chance, applied, and worked in the kitchen during the summer of 2019. Points credits the class with helping him prepare for the experience.

“It helped me a lot with my people skills,” Points said. “It’s something that I struggle with.”

“There’s a pool with an open bar right there by the kitchen, so people come up and want to talk.”

Points currently works in the kitchen at MRK Public in San Clemente and eventually wants to go to culinary school and become a professional chef.

He said the class was fun, but it definitely pushed you.

Jana Graber, who teaches the Intro to Culinary Arts class at San Clemente High School, emphasizes that there are life lessons being learned that go beyond the class kitchen.

“The things that you learn here will adapt very well into your life in many ways,” Graber said. “Whether you work in a kitchen, or as an auto mechanic, or in an office, if you’re efficient and organized and can think on your feet, those are all professional skills that will serve you for life.”

Graber doesn’t handle her students with kid gloves (or pot holders). She wants to give them a taste of what it means to be a chef, how a kitchen is supposed to be run and how to be prepared, communicate and work as a team.

“It’s definitely a very professional culinary-focused class,” Graber said. “I graduated from the Culinary Institute of America in New York. And what I would like to bring to (my students) is a smaller version of my culinary education. I had a really unique opportunity to be taught by world-class culinary teachers and that’s kind of what I try to bring a high school version of to the classroom.”

The class started during the 2018-19 school year and included a brand-new, state-of-the-art commercial kitchen. Graber got to shop for all the things she thought the kitchen would need, plus the students helped get everything organized.

In October 2018, the new kitchen had its grand opening and ribbon-cutting.

The first thing they made were pumpkin muffins because the grand opening was so close to Halloween.

“As you can imagine, having six stations trying to measure out flour and sugar. It took a while to kind of get a groove,” she said. “So that first day was exciting, but it was kind of chaotic.”

If you know Graber, the one lesson that gets reiterated over and over in class is two words (or three in French): Be prepared.

“The first thing that we talk about is mise en place, which is the French words for ‘everything put in its place.’ That’s kind of the backbone of what this program is, about preparation.”

“It’s getting your stuff prepped. They have to prepare everything, organized first, and everything laid out, before they can start cooking,” she said.

And then that preparation gets put to the test with some stress-adding finals such as cupcake wars, making homemade pasta, and chili cook-offs — many times with industry professionals, teachers, and parents as judges and spectators.

But there are perks (besides getting to eat everything you make).

For this year’s class, CCA paid for students to take their food handlers certification test. Students not only got a grade in class, but a certification that would help them if they wanted to get a job in a restaurant or any job where food is handled.

The class is also eligible to earn college credits for Saddleback College.

Some of the most fun perks are meeting professionals from the culinary industry who come into class and help judge the food students make.

One of those relationships is with Laguna Cliffs Marriott Resort & Spa and its executive chef, Sal Giuliano.

Giuliano is a frequent guest at the class, being a judge at the cupcake wars final and showing students how to make homemade pasta.

That relationship certainly helped former student Points, as the Intro to Culinary Arts class was right up his alley.

“When I saw a culinary class, I thought we’d take some shortcuts on things, like store-bought pie crusts,” Points said. “But we didn’t do that.”

“I enjoyed the hands-on experience of it, making things from scratch.”

“He was a great student because he was really, really into food,” Graber said about Points. “Loved talking about it, cooking it, and eating it … my favorite kind of student.”

Elyse Rideout, 16, took the Intro to Culinary Arts class as a junior and plans to take the advanced class for her upcoming senior year.

Rideout grew up cooking with her grandmothers prior to taking the class, but said she learned a lot of skills and tips that she didn’t know before — especially with her love of baking.

“It definitely helped me with things like, why does the yeast take a minute and why the yeast is dead. If it doesn’t bubble after 5 to 10 minutes you need to restart. Also with flour, with measuring, you’re not supposed to just scoop out the floor. You need to mix the flour around and then use a spoon to scoop,” Rideout said. “Just little tricks like that that really helped with my baking.”

Rideout wants to go to medical school and become an anesthesiologist in the Navy, but says the class has made her think about a future in the culinary industry.

“This class has really opened my eyes to how the culinary industry works,” she said. “It’s definitely something I would consider.”

Going forward, Graber would like to teach an advanced culinary class that also works on catering school and district functions.

In the meantime, she’s hoping one of these days she can get a full school year in the new kitchen. The first school year’s class had to wait for the kitchen to be finished, and the second was disrupted because of the novel coronavirus pandemic and the campus’ temporary closure.

But Graber and her students made the most of their quarantine by showing off their cooking skills via the class’ Instagram page, @tritonkitchen.

Throughout the remaining school year, Graber and several students posted photos and videos of things they were making while at home, leaning on many of the lessons they learned in their class kitchen.

“I try to remind them: You guys are making good food,” Graber said. “I have adult friends who don’t know how to do this stuff.”

Congrats to the CUSD Insider, which was honored du

Meal kits will provide breakfast and lunch for sev