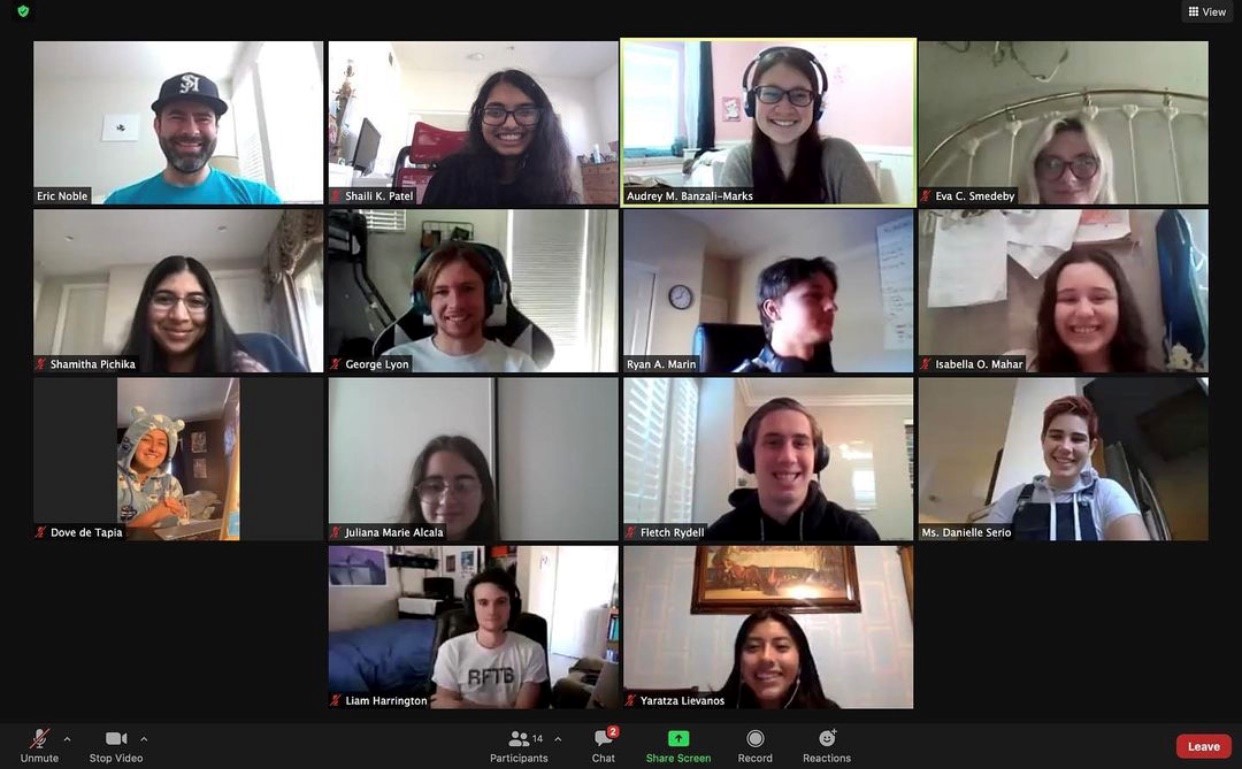 About 350 students from 32 schools participated in the 2021 virtual Orange County Academic Decathlon – and for the first time, a Capistrano Unified high school took first place.

San Juan Hills High School, coached for the past seven years by English teacher Danielle Serio and headed by senior Ryan Marin, took first-place honors in Division 2 with a score of 35,177.7. The team goes on to compete at the state level next.

“We weren’t sure what the decathlon would look like, given the pandemic,” Serio says. “It took so long to get the materials together. We usually recruit in the spring, but [because of the coronavirus restrictions] we were all still scrambling to figure out what we were doing.”

Thus, she adds, preparation materials that usually arrive in the spring didn’t come until October.

Marin and his team had to fill 11 positions vacated by graduated seniors, so he conducted two weeks of up to six online interviews with interested students.

The Academic Decathlon was conceived by former Orange County Superintendent of Schools Dr. Robert Peterson, who envisioned “a decathlon of studies” while serving as a prisoner of war during World War II, according to the Orange County Department of Education. The first contest took place at Bolsa Grande High School in 1968.

Present-day decathlons are staged at the county, state, and national levels, with nine-member teams competing on objective tests, speeches, interviews, and essay assignments. The rules dictate that each team must have three “Honor” students (those with GPAs of 3.80 and above), along with three “Scholastic” students (GPAs of 3.20 to 3.79) and a trio of “Varsity” students (GPAs of 3.199 and below).

“We were diamonds in the rough, but we put together a good team,” Marin observes, especially considering that the scrimmage of seven academic tests were only a month away. The teams met virtually twice weekly to do sample quizzes, he explains, and review results.

“Academic Decathlon relies on individuals,” he notes. “Team members need to study and prepare, and most of it is self-study.”

The three top students in each category competed, with the other students preparing as alternates.

Preparation for competition was a logistical nightmare, Marin says.

“Sometimes it’s hard to get everyone on Zoom paying attention,” he notes. “But I can tell most of us studied because of the test results.”

Even in a non-pandemic year, the in-person team meetings at school are merely a check to see how everyone on the team is doing, he explains.

“All of the important studying is happening at home,” Marin says.

In addition to the short timeline, costs were another challenge.

“It costs money for materials and registration fees,” Serio says, “and we as a team decided to never deny a student because they couldn’t pay.”

“Fundraising has always been a struggle, even in a normal year,” she adds. “You don’t see the competitors on a field doing something.”

This year, the school moved money around and adjusted individual payments in order to compete.

“The kids interested in the Academic Decathlon have to be really good students dedicated to success,” Marin notes. “Every year, we do a little bit better.”