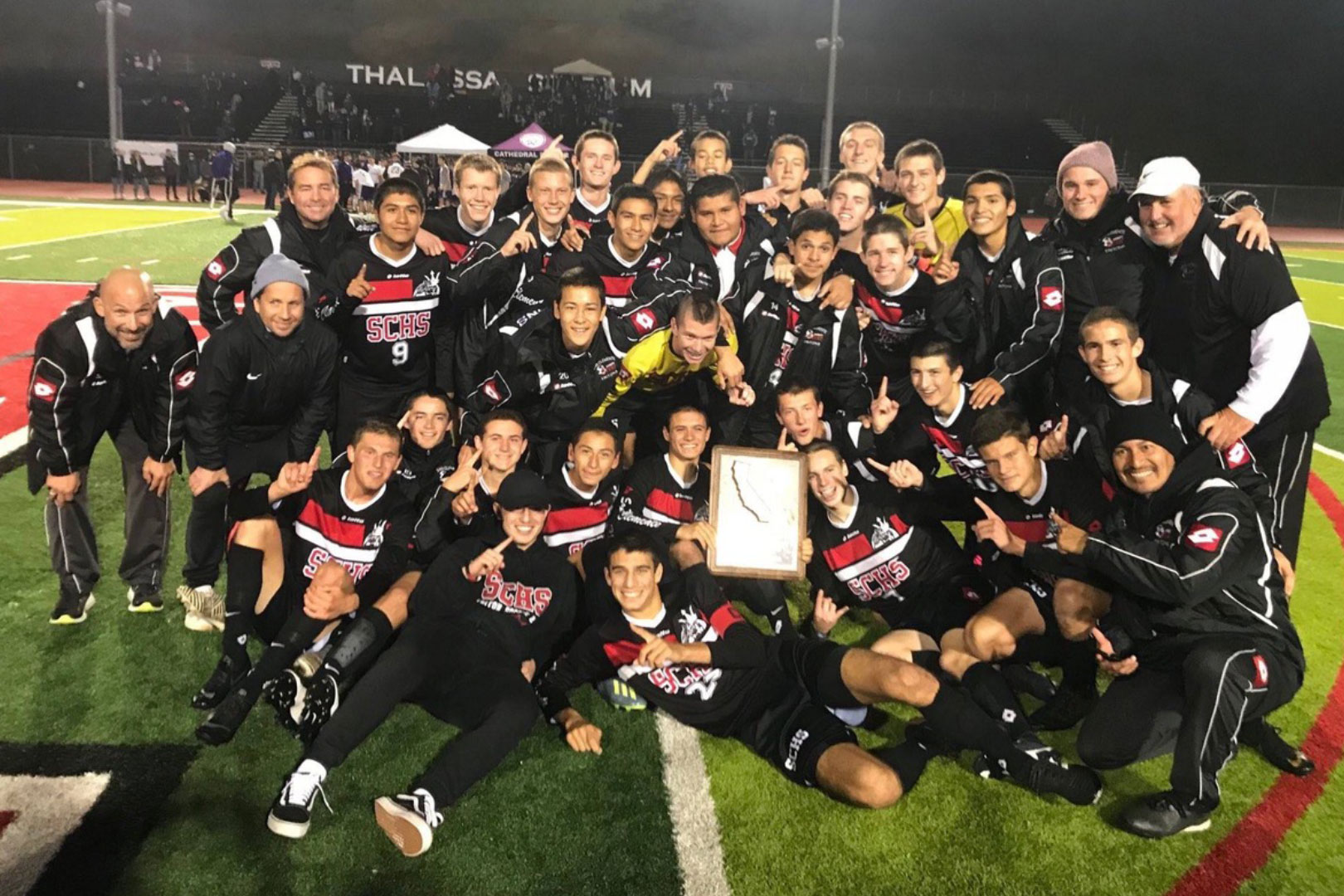 But when Coach Michael Pronier reflects on the school’s extraordinary soccer season — besting Cathedral of Los Angeles in a nail-biting, penalty-kick overtime home-game thriller on March 2 — what brings him the most pride is thinking about the characters of the young men he coached.

“What doesn’t necessarily get noticed by many throughout the season is the character and pride of this particular group of student athletes,” said Pronier, the Tritons’ soccer coach since 1993. “Not only do we have 14 Scholar Athletes with GPAs of 3.75 or higher, but we have a group of young men who took their CIF Semi-Final and State Final losses last year to heart. They were committed as a team to win it all this year. This team was truly a motivated and quality group of young men.”

A season ‘trifecta’ — tops in league and CIF and State champs

It was a season that will take its rightful place in San Clemente High’s athletics record books. On December 14, the team lost its one and only game of the season out of 21 games — coincidentally enough, to Cathedral, the same team they lost to in the CIF Semi-Finals last year. In what Coach Pronier proudly called a “trifecta,” this season his team was undefeated in the league, won the CIF Championship and the State Final — and for good measure, was ranked No. 1 in California in all of the polls.

But again, the coach seemed just as impressed by his players’ maturity, camaraderie and respect for one another than by the stellar season they notched.

“This mark of consistency and success is unparalleled by any of our past teams and is a credit to our players’ character, commitment and tenacity,” he said. “The young men in this group celebrated with joy and managed to respect their opponents. One of my favorite parts of the final game was watching them truly enjoy the moment without embarrassing anyone. The smiles and jubilation were definitely visible, but in standing back and watching, it was laden with pride, excitement and mutual adoration for each other.”

“Every time I look back at the championship game, I think about how great of a moment that was, along with how nerve-racking the game was,” said Koosha Jadbabaei, one of the team’s two captains.

Jadbabaei, who plans to major in data science at UC San Diego, spoke fondly of Coach Pronier and his coaching staff. “They don’t get the credit they deserve. All our assistant coaches have other jobs, and Coach Pronier puts in endless hours of work in organizing the program. We played for them, and I will definitely never forget winning the CIF and State championship for the rest of my life.”

Staying focused on the ultimate goal

Blake Bowen, the team’s other captain, said the secret to the championship game — and the entire season — was staying focused. “We had to stay calm and think about what our ultimate goal was. And that was to win,” said Bowen, who plans to play soccer in the fall at San Diego State University.

He echoed Jadbabaei’s fond sentiment about Coach Pronier and his coaching staff. “They showed us the way to victory and taught us many things on and off the field. They were the best coaching staff we could have had.”

Coach Pronier said the players and their families will soon gather for a final celebration to reflect on the season and, for some of the departing players, to inspire the team’s up-and-comers.

“I believe the defining goal this year for both players and coaches alike was to play and compete with their friends and leave a little piece of themselves behind,” he said, adding, “‘SC Till We Die,’ as they say.”