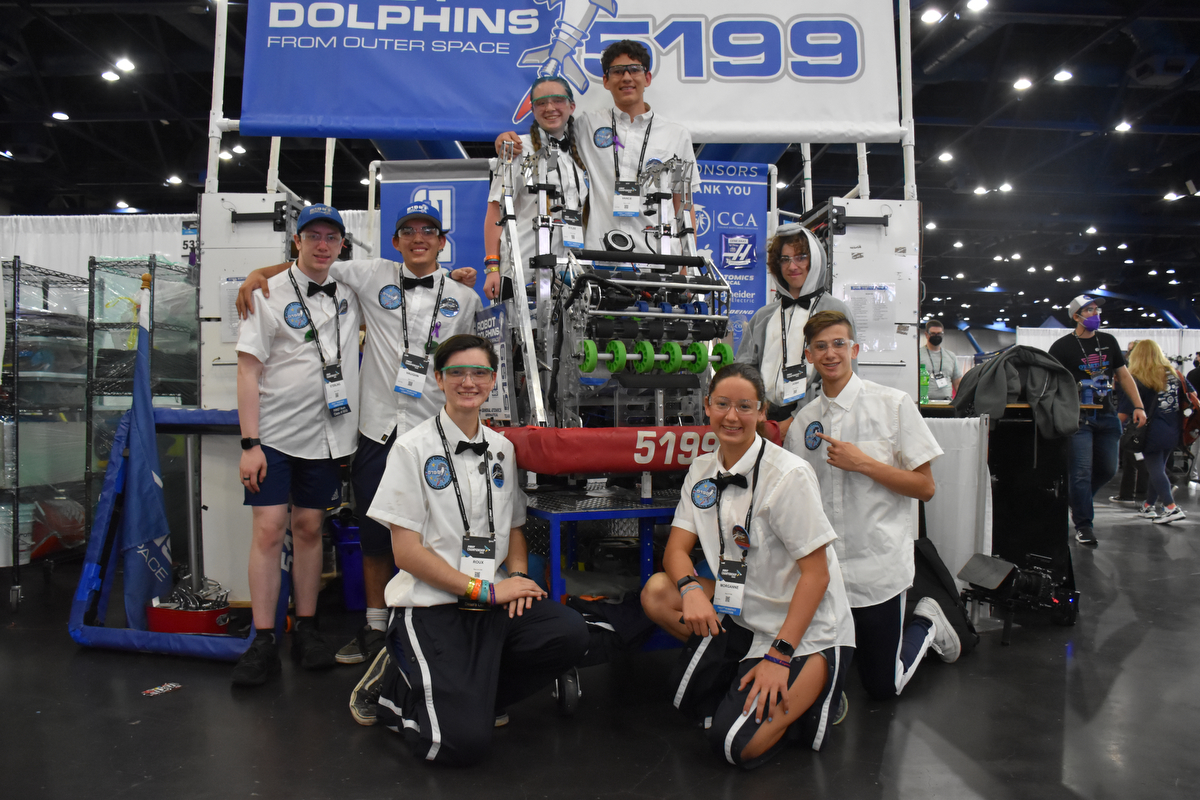 After rallying in the last week of the regional tournament season to reach the FIRST World Robotics Championships in Houston, Team 5199, the Robot Dolphins from Outer Space, competed in an event that Coach Richard Jung called the toughest world championships yet.

Team 5199 and its three-team alliance was knocked out 2-1 in the quarterfinals of its division, finishing with a 6-7 record in Houston. The Robot Dolphins were part of the 75-team Carver division and finished the season 42-21 overall.

The world championships were eventually won by perennial power Team 254, the Cheesy Poofs from Bellarmine, which finished the season 50-5-1 overall. Team 254, which rolled into Houston with a 31-1 record, was pushed to the limit before its alliance prevailed 2-1 in a final that pitted it against an alliance with Team 4414, High Tide, from Ventura. High Tide was the team the Robot Dolphins edged to take the top spot in the Aerospace Valley Regional and qualify for Houston.

“That was a huge effort to improve the robot and strategize,” Jung said of the season-long effort that led to the World Championships.

“Houston was massive,” he said, noting that this year, two year-ending events in Michigan and Houston were folded into the championships.

“I think we did pretty well and played competitively,” Jung said.

In most years, Jung said, CUSD would begin its regional season with a nearly fully formed robot and would only make tweaks during the season, particularly in the final week. Not so this year with Team 5199 and its robot, Hermit Crab.

“We had to push harder to achieve what we wanted,” Jung said. “We put in more effort and more work.”

Even in the final week, he said, the Dolphins were making wholesale changes.

Looking ahead to next year, Jung expects to have a young team. The pandemic, he said, knocked the program off track a bit and interrupted the flow of students into the program.

However, even with the disruptions, which all schools contended with, Jung was happy the team was able to add to the collection of blue banners it has arrayed on the robotic work room at Capistrano Valley High.

Just making it to Houston was a big deal, especially after the COVID-19 pandemic caused cancellation of the 2020 season and forced the team to compete virtually last year.

CUSD brought a contingent of about 70 team members and supporters. Overall, about 35,000 people thronged the George R. Brown Convention Center.

Jung said the team worked day and night until the final bell.

Each year the team gives its robot a nickname. In keeping with the Robot Dolphins theme, the robot is always given a maritime name. Past robots have been Kraken, Leviathan, Tsunami, and Poseidon.

In 2019, the last year of live World Championships, Kraken won two state regionals for the first time, and went into Houston as one of the top teams in Southern California. However, Kraken broke down in the playoffs after qualifying second in their division.

Robotics has become a premier program in the CUSD’s Science, Technology, Engineering, and Math (STEM) education, from high school down through primary education. Robotics combines engineering, building, programming and strategy.

Each year, students from across the country and internationally build robots to compete in the FIRST competitions, which claims to reach about 679,000 students in 110 countries annually.

Although the competitive season is over, the team is not done with Hermie. Jung says modifications will be made for various events where the robot will be showcased. The team also has a back-up robot on which the team hopes to install a “swerve drive,” a drivetrain that allows the robot to spin while maneuvering and makes it incredibly quick and hard to stop.

The team is also working on a robot that will fire t-shirts into crowds during sports events.