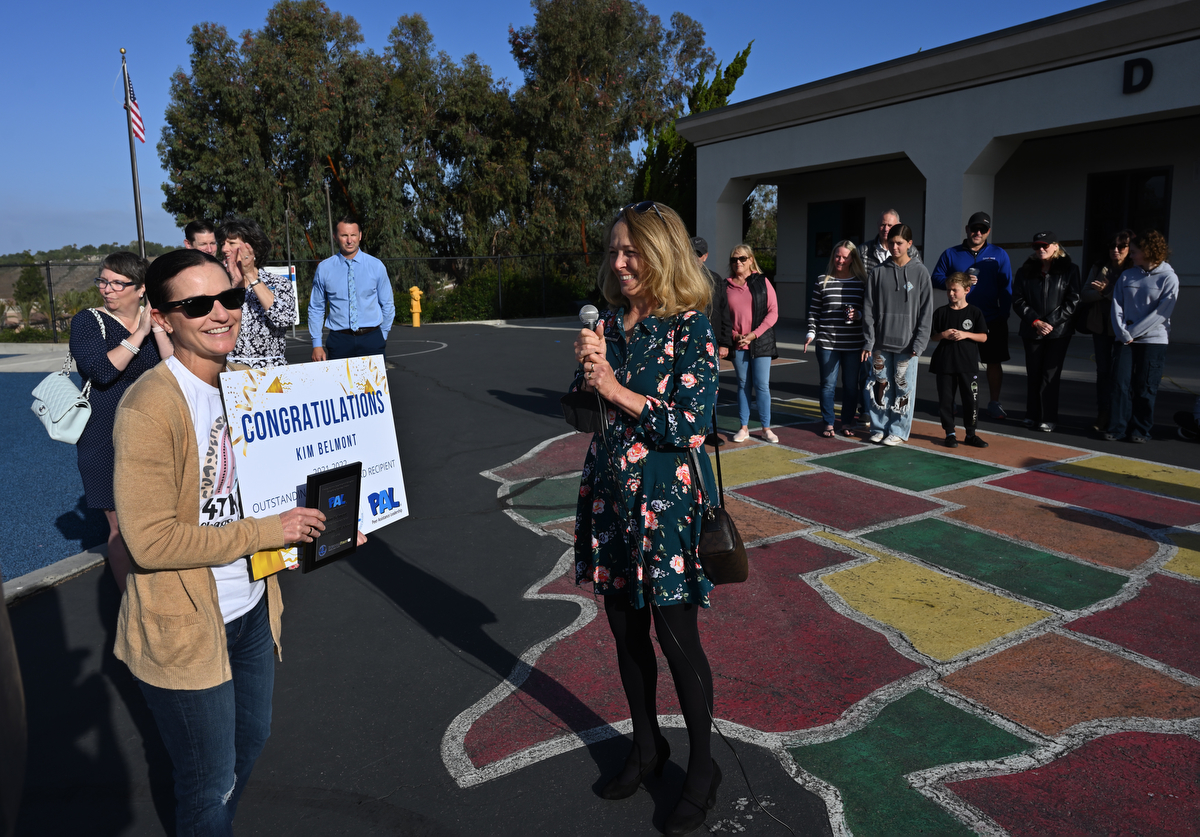 Kim Belmont of Las Flores Elementary School, left, smiles as she receives a Peer Assistance Leadership (PAL) award for being an Outstanding PAL Advisor from Deirdre Hill of the OC Department of Education during a school assembly. Photo by Steven Georges/CUSD Insider

“Oh my gosh, I thought I was in trouble,” Ladera Ranch Middle School teacher Amanda Hatcher said as the well-wishers, accompanied by her husband, Michael, and sons, Peyton and Elliot, barged in on her PAL gathering on a Monday morning.

Hatcher was among three educators and Ladera Ranch was one of two programs to be surprised with the awards this year.

In honoring teacher Kalyn Rodriguez, who with her class at Aliso Viejo Middle School was another double winner, Principal George Duarte said, “It’s pretty incredible to be recognized as both when there are 150 programs in the county. You hit a grand slam.”

At Las Flores Elementary, advisor and fourth/fifth grade teacher Kim Belmont was surprised at the school’s flag salute, right after PAL students announced upcoming activities, including an outreach program to support National Mental Health Month. Belmont, whose program was recognized in 2019, was cited as an Outstanding PAL Leader.

Created in 1980, and available in fourth grade through high school, the program’s mission is “to develop youth leaders who connect with their peers to create a caring, safe, and supportive school environment for all.” With the help of faculty advisors, the student groups organize school activities, including on-campus spirit events and community outreach and social service efforts.

Deirdre Hill, a PAL Project Liaison with the OC Department of Education, made the presentations to the teachers.

At Ladera Ranch, Hatcher is in her final year as a PAL Advisor after bringing the program with her from Talbert Middle School four years ago. She said this was her best student group since she started with the program.

“They take the initiative. I’ve never had such a bunch of motivated kids,” said the 18-year educator and former Teacher of the Year. “This is a good way to end my PAL run.”

“She’s so kind and compassionate to everyone,” he said. “She’s very fun and outgoing and helps all of us.”

Rodriguez was honored Wednesday and thought she had missed out. After seeing announcements on Instagram from the Monday surprises at the other schools she said, “Oh, man, we didn’t get it this year. Well, maybe next year.”

Her wait was much shorter. School administrators gave Rodriguez a two-part surprise, announcing the class award indoors and then taking the teacher outside where a large contingent of students and family members, including Rodriguez’s husband, Ernesto, daughter, Elena, and mom, Debi Harper, cheered her individual award.

“You guys are the reason I come to work most days,” Rodriguez said to the PAL crew.

Kids in Rodriguez’s class, such as sixth graders Sofia Bonfanti, Aubrey Westerfeld, and Sadie Hansen, were eager to talk about their advisor’s kindness and friendliness.

“She keeps us organized and gets things done while being nice and fun,” Hansen said.

“This is my favorite class,” said Rodriguez, who also teaches sixth grade history and is a secondary teaching assistant principal. “I’m just a guide. It’s all them.”

For Belmont’s recognition, a dozen family members attended, including her husband, Joe, and children, Dominic and Grace. Belmont said when the program became available to grade school kids in recent years, she signed up. One of the main benefits of the program, she said, is that “it’s more social service than just school spirit.”

Among her group’s monthly outreach activities were donating animal blankets to a local shelter, as well as a student-initiated letter-writing program to local military service members. That event also included a special Camo Day on campus.

“We get all the stories when she comes home,” he said.

PAL programs allow students to connect with peers and create a caring, positive school environment. According to its literature, by “encouraging students to help students, the PAL program’s multifaceted approach provides opportunities to lead on campus and incentivizes strong character.”

The classes work alongside nonprofits, and students undergo leadership training, team building exercises, and help acclimate new students to life on campus. The faculty advisors take two-day certification classes and collaborate with the school administrator and  leadership team to develop a vision of the role PAL plays on campus.

Principal Holly Wiseman at Las Flores has been a close colleague of Belmont through their tenure.

“We arrived here together seven years ago,” Wiseman said. “She got (PAL) up and running and it’s grown ever since. She has super-high expectations. She’s really teaching them to be future leaders.”