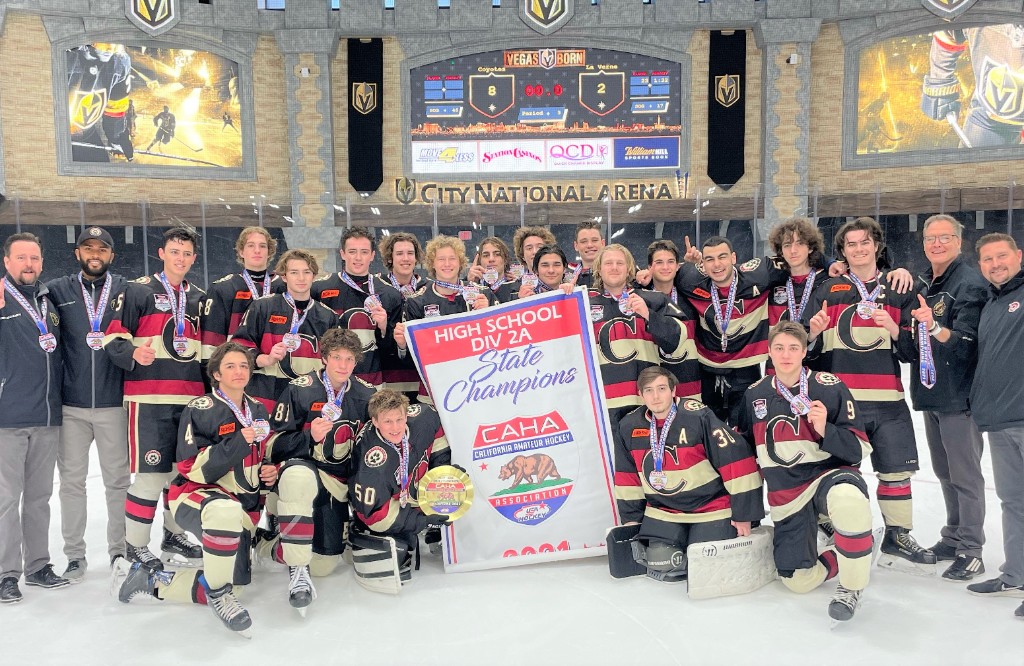 While high school ice hockey may not garner the same level of recognition as football, baseball or basketball, athletes attending high schools within the Capistrano Unified School District do, in fact, compete on the ice.

Not only do the Capistrano Coyotes Ice Hockey team compete, they win.

The Coyotes, which play at the Great Park Ice & FivePoint Arena in Irvine, advanced to the USA Hockey High School Nationals in Omaha, Neb. where they reached the Division 2 championship game on April 19.

While the Coyotes were defeated, 5-4, in an overtime thriller against the hometown Omaha Junior Lancers, the team still flew home with a silver medal.

“We didn’t see ourselves going all the way to the finals in our first trip out there,” said Mike Townsend, the Coyotes’ general manager. “It was really a great reward for the program and for the kids.”

Formed in 2013, the Coyotes started with about 35 players, Townsend said.

Today, Capo has about 60 players, enough for Division 1 and Division 3 varsity teams plus a junior varsity team.

Along with their two state championships, the Coyotes have been ADHSHL Varsity Division 2 champions four times. The junior varsity squad also won a ADHSHL title.

The Coyotes also qualified for the nationals in the 2019-20 season, though the coronavirus forced the cancelation of the tournament.

“It’s really rewarding to see how far the program has come,” said head coach and coaching director Jean Labbe, who has been with the team since 2014. “We’ve had a lot of success, pretty much from the get-go here and then being able to win states this year … was a great achievement. Just getting recognized at a national scale was really rewarding for me.”

In a season rife with uncertainty and periodic shutdowns due to the virus, keeping the team together as a cohesive unit presented unique challenges, Labbe said. Labbe credited the captains for making it a point to keep the players united.

“They didn’t have enough time to bond on the ice or even in the locker rooms,” Labbe said. “So I think what Luke (Ossola) did and the other captains did this year was pretty special to keep the kids united.”

This was done through social media, putting in extra time when they did hold practice and getting together and practicing together on their own time.

“A lot of hard work paid off,” said captain Luke Ossola, a student at Aliso Niguel. “To go to nationals when we didn’t go last year was really cool.”

The guidance and leadership provided by the four-year team members also factored into the successful season, Ossola said.

“They know how to work for it,” said Ossola, who scored the winning goal in the quarterfinal game at the nationals. “I think that was definitely an advantage. Their work ethic was through the roof.”

To be a member of the Coyotes, players must attend a Capistrano Unified School District school. While the team is not formally affiliated with CUSD, the district has provided support in a variety of ways, Townsend said. The ADHSHL requires players to maintain a GPA of at least 2.0, but the majority of the Coyotes hold GPAs off at least 3.0, Towsend said.

A typical season consists of about 40 games and runs from August through February when the playoffs begin. There were far fewer games played during the 2020-21 season because of the coronavirus pandemic.

The state tournament was also moved to Las Vegas because the California rinks were closed.