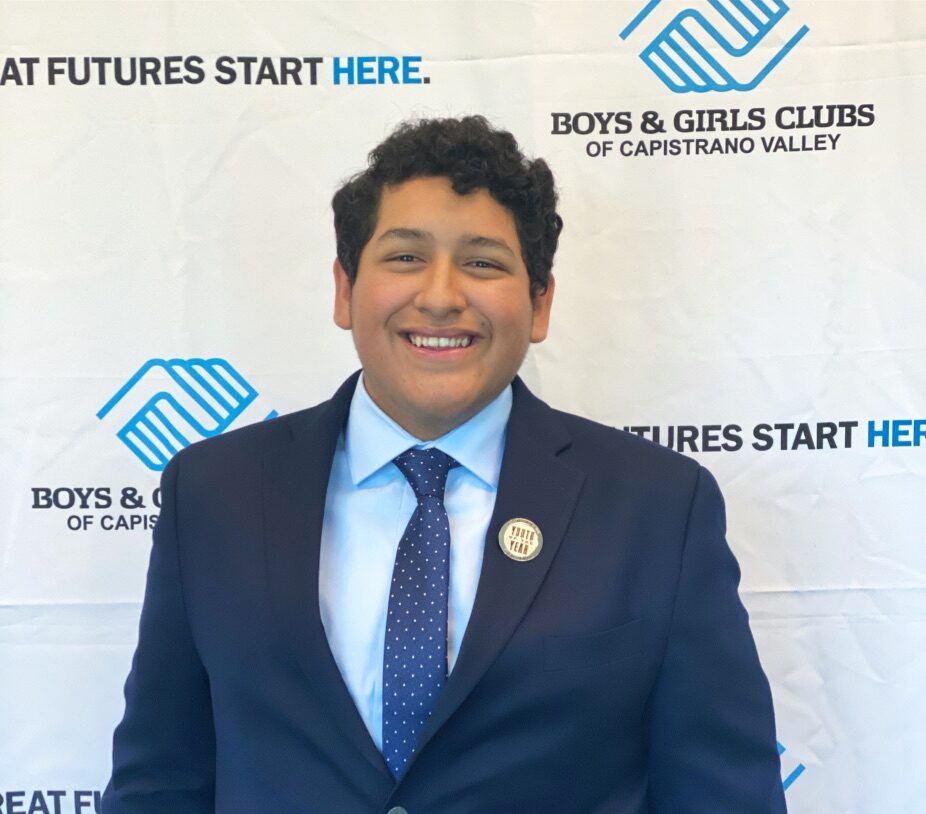 There is something inside Mario Lopez that belies the cherubic face and the gentle, humble exterior.  There is grit. A toughness and resolve in a kid who has knocked down numerous obstacles to see a horizon beyond the seeming abyss.

“Honestly, he’s the most resilient student I’ve known — by far,” said Gabriella Littlejohn, director of the Via Positiva Branch of the Boys and Girls Club of Capistrano Valley.

Grit is a word several have used to describe the 17-year-old. Added to brains, selflessness and work ethic, the quality has helped Lopez become one of six national finalists for Boys and Girls Club of America Youth of the Year recognition.

Grit? Lopez has endured a sandstorm.

One story he shares from his sophomore year in high school is illustrative.

“I came home and learned we were being evicted,” Lopez said. “All our belongings were on the lawn. My everything had been thrown out.”

The  family loaded up what it could save and went to spend the night in a Walmart parking lot in their 2002 Corolla.

“That would be our home for the next three days,” Lopez said, adding the family used a gas station bathroom for cleaning and grooming.

But eviction wasn’t the end of the day for Lopez. He had a test on polyatomic ions for AP chemistry the next day. So, Mario studied in the car by the light of his cellphone.

“I didn’t want to use it as an excuse,” he said, as if sudden and unexpected homelessness was no reason to delay taking a test.

Littlejohn says that is just Lopez’s nature when dealing with potential setbacks.

“He goes on and aces the test and no one knew what he had been through,” she said.

Lopez’s situation is only slightly more stable now. He, his mother and stepfather, share a bedroom in a two bedroom apartment in Laguna Niguel with another family of four.

“We make it work,” Lopez said, which may be a kind of motto.

Mario’s mother, who came to the U.S. 30 years ago from Mexico, is an unemployed hotel maid. Because of a history of diabetes and anemia and the lingering COVID-19 epidemic, she is considered at-risk and has been unable to find work. For most of Mario’s life, she raised him and three older siblings as a single mother. The older children battled with substance abuse and have since moved from the home.

In his biography, Lopez describes walking through the “glass doors” of the Boys and Girls Club as a sixth-grader as a life-changing moment.

At first, Lopez said he thought it was just another after school program.

“Then you realize it becomes much more,” he said, describing the mentorship, leadership training and guidance.

“They provide food and fun. They prepare you for success in life.”

He also learned for the first time that he didn’t have to go home hungry.

Lopez says he entered the Via Positiva branch as a shy and insecure sixth grader with no particular vision or goal in life.

However, Littlejohn and others at the club soon saw through Lopez’s shield to his potential and resolve.

So, Littlejohn put down a challenge.

“I told him, ‘When you’re old enough, you’re going to be a Youth of the Year and be a role model for these kids the way they are for you.’” Littlejohn said. “We always knew he’d be great.”

Inside the club, photos of past Youth of the Year winners are displayed.

“I always looked up to those photos and wanted to be on that wall,” Lopez said.

Lopez took his first stab as a 16-year-old and, despite the setback, came right back a year later. Grit.

Among Lopez’s inspirations and mentors have been Yossymar Rojas, a national finalist in 2013 from Via Positiva, and Yossy’s younger sister, Yary Rojas.

The Rojases, Lopez said, have taught him not to be afraid to show his vulnerability and to treat the interviews with judges like conversation rather than competition.

Also helping Lopez develop has been the Boys and Girls Club relationship with Toastmasters, or Coastmasters as they’re called in Orange County, where Lopez has learned and honed his speaking skills. He is also the president of the branch’s Keystone Club, the main member-run service organization of Boys and Girls Club.

Through that association, Lopez experienced a number of firsts: such as his first trip out of state, first airplane flight, first night without his mother, first night in a hotel and first ride on a roller coaster. That was in Atlanta.

Although Lopez has never been to New England, due to COVID, Dartmouth’s Office of Pluralism and Leadership convinced him to change his preference from Cal Berkeley.

At Dana Hills High, Lopez carries at 4.3 GPA, with an unweighted GPA of 3.8. History and English have been his only stumbling blocks, and don’t even try to talk to him about European history.

“He’s got a great message,” Baker said. “He surpasses all expectations all the time. He’s a humble young man who works to be a model of what we want for all kids.”

To participate in the Youth of the Year competition, participants undergo interviews, present speeches, written essays, letters of recommendation and school transcripts.

To get to the finals, Lopez had to earn a nomination from his club, no small feat in a high-achieving branch that as recently as 2013 advanced one of its kids to the nationals. It took Lopez two tries to earn his club’s nomination.

From there he had to advance through the Orange County competition with 13 clubs, then on to the state and Pacific Western regionals against Hawaii, Washington, Oregon and Alaska.

In the nationals, representatives from the Northeast, Southwest, Midwest, South and U.S. military bases will be on hand.They represent the best of the Boys and Girls Club’s 4,300 branches and more than 4 million members.

Or as Littlejohn said, “He doesn’t realize how amazing he is.”