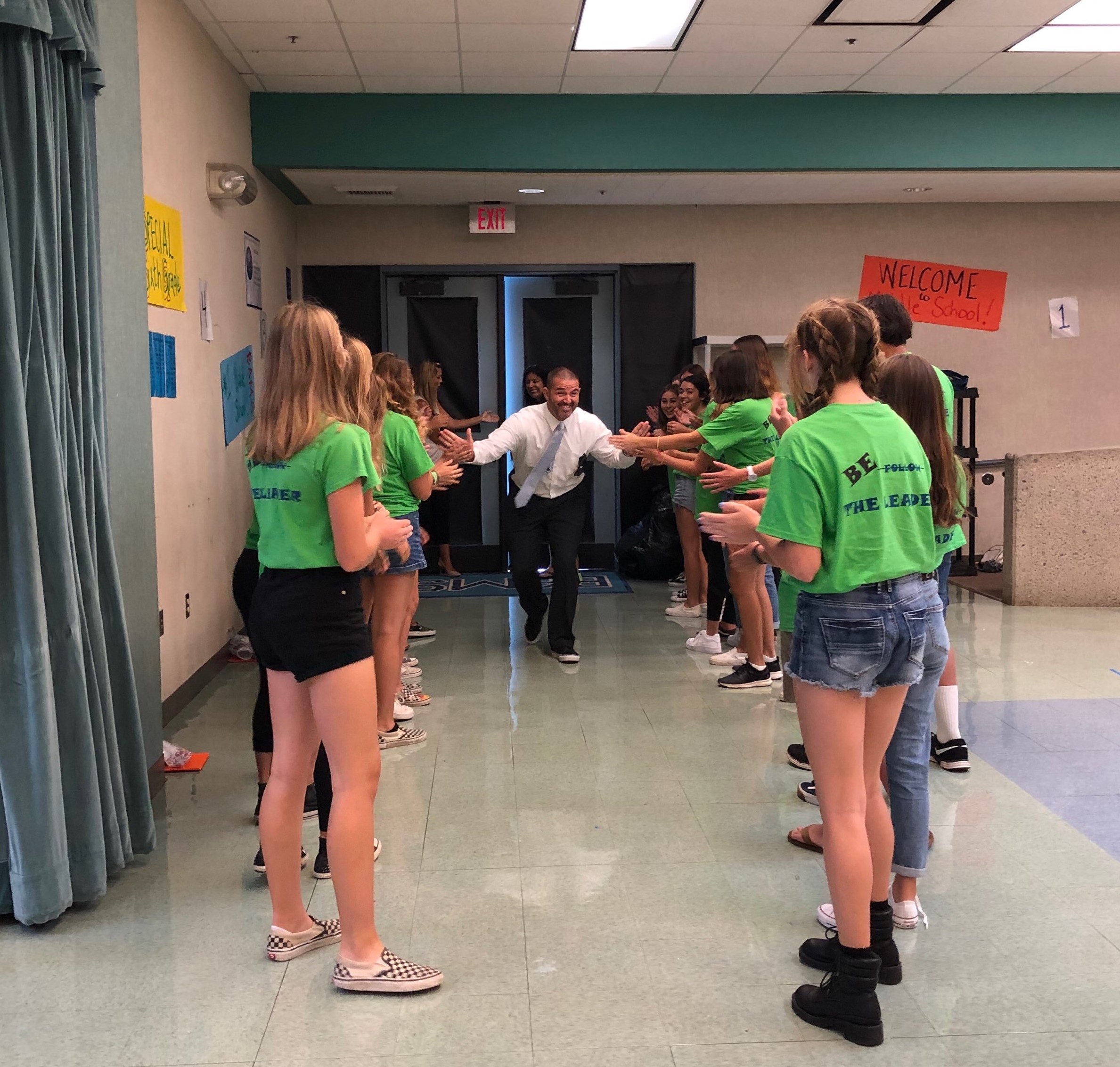 The incoming students were a little nervous about starting middle school.

Would they be able to find their classes?

How do you open a locker?

What about making new friends?

The staff and 60 eighth grade students at Bernice Ayer Middle School (BAMS) wanted to make sure the incoming sixth graders for the 2019-2020 school year felt comfortable coming to their new school, so they hosted WEB, which stands for “Where Everybody Belongs,” a middle-school orientation and transition program that welcomes sixth graders throughout the first year of their middle school experience.

Built on the belief that students can help students succeed, the program trains mentors from the eighth grade class to be WEB leaders to serve as role models, guiding the sixth graders to discover what it takes to be successful during the transition to middle school.

“We are so excited to have you,” said Bernice Ayer Middle School Principal Nick Stever to sixth graders during an orientation on Aug. 15 on campus grounds. “BAMS has been preparing for you since school ended. You’re going to be asked to do things today and all those skill sets will help you be successful in sixth through eighth grades. BAMS leaders are going to be with you today, teaching you how to be successful. I promise you if you listen to these WEB leaders, you’ll have an amazing year.” 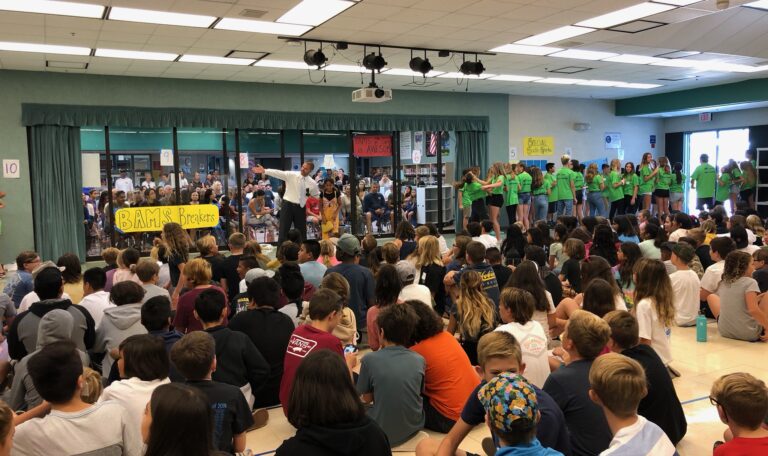 The leaders help incoming sixth graders get to know the school and each other and will continue to provide support throughout the year. The program is designed to make sixth graders feel welcome at a new school and see a few familiar faces on the first day.

WEB is in its fourth year at the school, and Stever already is seeing results.

Every year, students take a California Healthy Kids Survey that addresses the school climate and safety, student wellness and youth resiliency. Stever said that since WEB was implemented on campus, the administration has seen drastic improvements. Last year, Bernice Ayer Middle School was in the 90th percentile of students feeling safe and comfortable at school.

“We encourage every sixth-grade student to be here,” Stever said. “The connection starts before they even arrive on campus.”

To extend a friendly and welcoming invitation to orientation, Stever said that over the last two weeks, every sixth-grade student receives a phone call from a WEB leader, saying they look forward to meeting them and that they will be taken care of throughout the year.

“I noticed they feel more confident – even just stepping onto the campus,” said Mariah Mayer, a Bernice Ayer Middle School English and Language Arts teacher. “WEB has given them someone to go to. With that peer support, they know they can survive the most tumultuous time in middle school.”

WEB leaders went through rigorous training over the summer for two days. Stever said he and the staff chose a wide range of eighth graders with leadership skills who are from every activity, academic subject and sport so that incoming students find someone with like-minded interests. They are students who are willing to put themselves out there and build friendships with students. 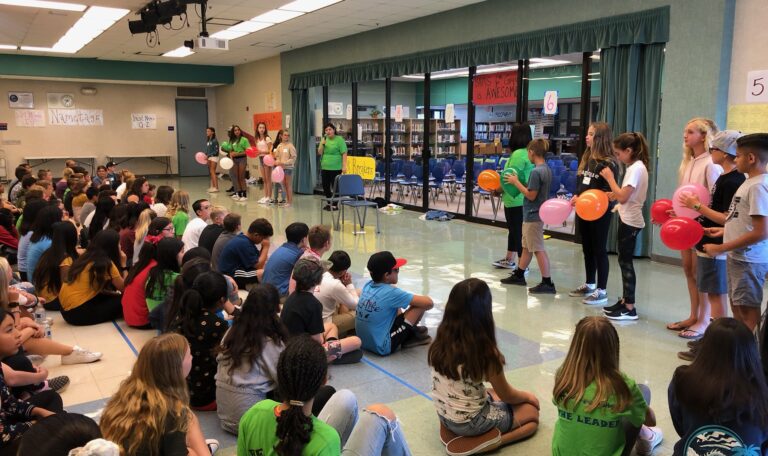 Sixth and eighth grade students will learn more about each other as the year goes on as they will meet up for pizza night and discussions on their report card. WEB leaders will give students advice on how to succeed in certain subjects and how to prioritize homework assignments and extracurricular activities.

During an opening assembly, the 300 sixth grade students played a few ice-breaker games, from a friendly competition in popping balloons to dancing to “Boom Chicka Boom.” 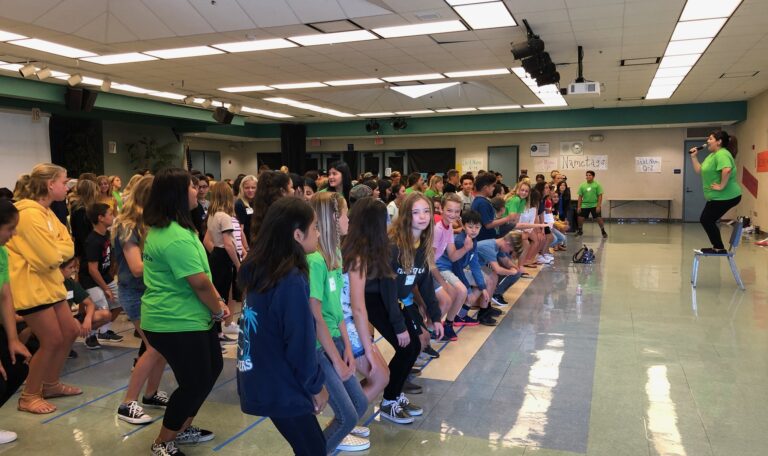 Bernice Ayer Middle School Science Teacher Veronica Vazquez asked the students to organize themselves in a line based on being the oldest, middle or youngest in their families.

“Did you get to choose that placement in your family?” she asked the students who responded with a “no.”

“Sometimes in life, we’re given situations that we might not love but we have to make the best of the situation,” Vazquez said. “You can build that support system with WEB leaders and if you’re unhappy, please don’t hesitate to reach out to somebody.”

Following the welcoming ceremony, students were split up to 25 randomized groups, where they were purposely separated from friends and the same group they had known for years. The idea was for kids to meet new kids from other schools. 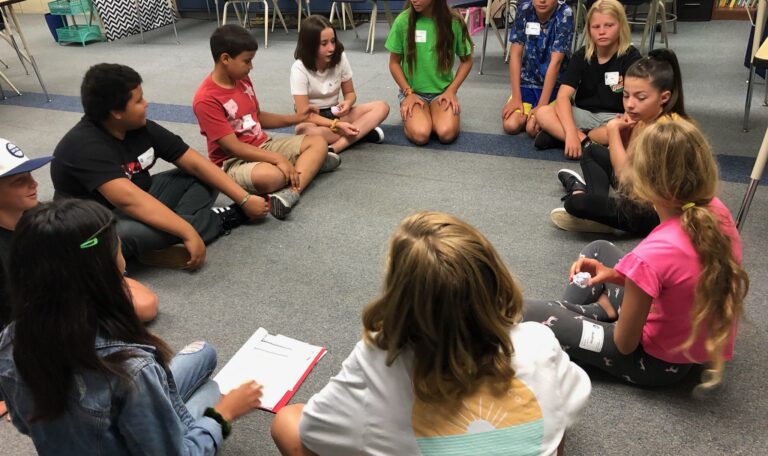 The groups of about 10 met in classrooms to play games, like reciting names of new faces.

“My name is Gloria, I’m in dual immersion, my favorite subject is science and I’m from a family of five,” the eighth grade WEB leader told her group of students. “I wanted to help incoming students like you not feel nervous or scared and to be a support system to you.”

She then passed around straws to each student and directed them to cross their arms and see if they could hold up the straws by linking arms. 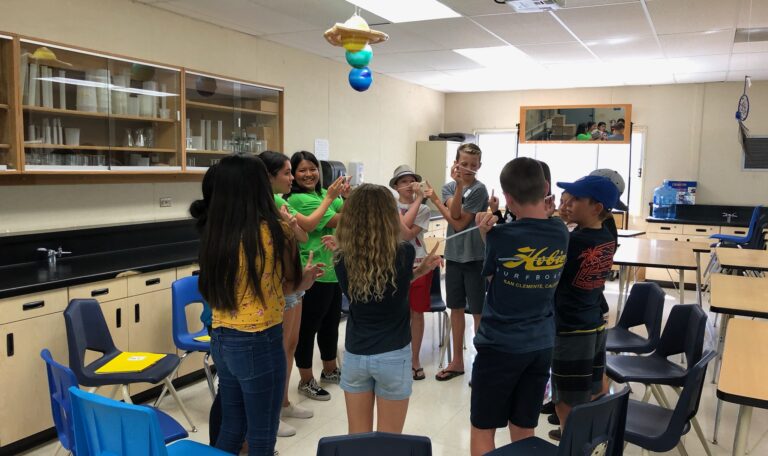 Students giggled as some straws fell to the ground.

“That’s what it’s all about,” Stever said. “It’s all about making them feel happy to be here.”