District officials and faculty members used the time as an opportunity to unite everyone for kindness, acceptance and inclusion in all its schools. Campuses sent a unified message of hope and support for those who experience bullying by wearing orange on Unity Day, October 24.

Educators, parents and community members will continue to extend their prevention efforts throughout the year. Such practices will help kids prevent bullying by talking about it, building a safe school environment, and creating a community-wide bullying prevention strategy.

In order for bullying prevention to work, everyone needs to be involved. 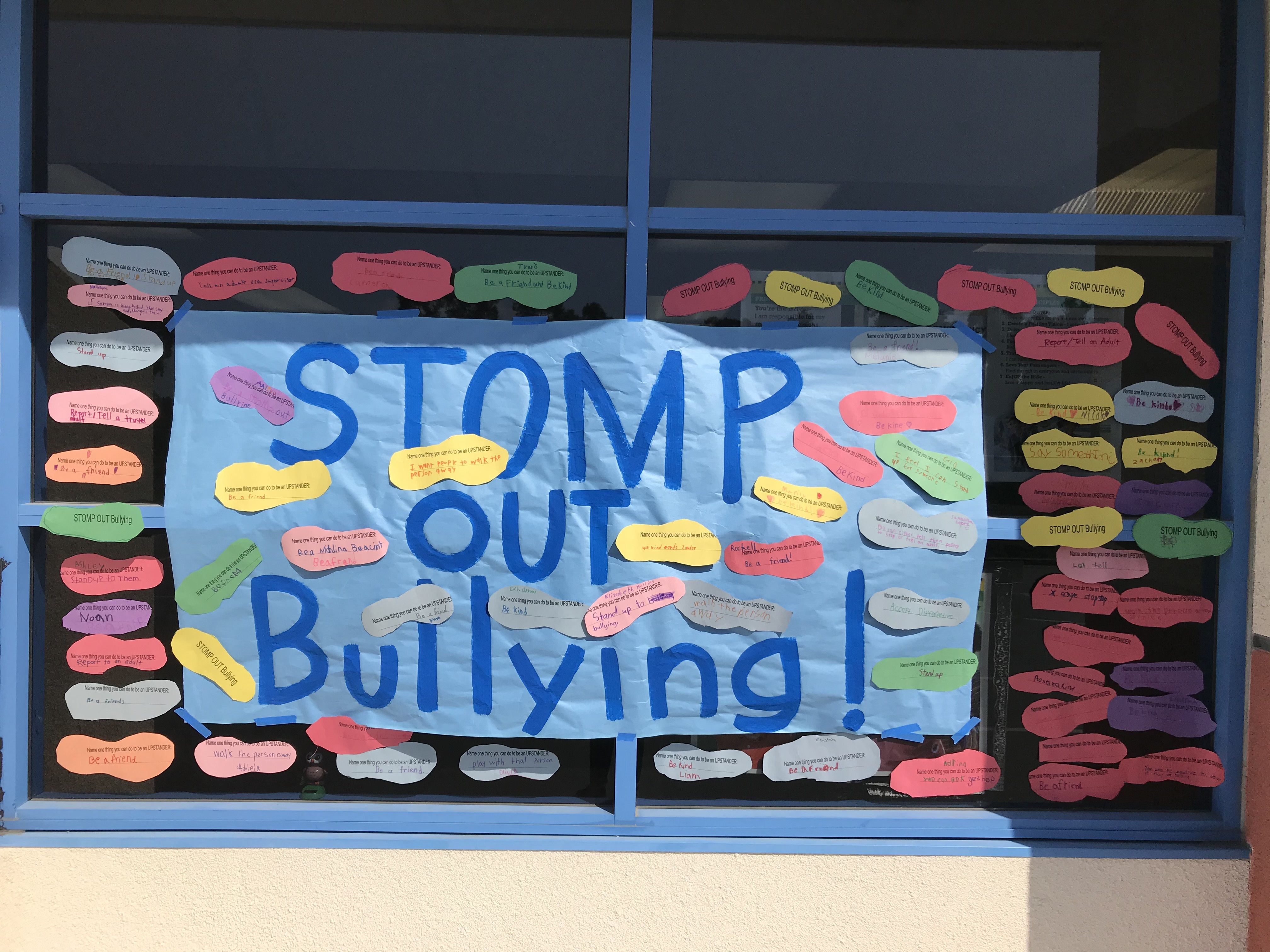 It’s recess. Kids are screaming and balls are flying. Take a closer look and you will find that not all classmates are joining in on the fun.

Girl Scout Troop 3672 at Tijeras Creek Elementary School in Rancho Santa Margarita wanted to make sure everyone had a friend. Their solution? The Buddy Bench. 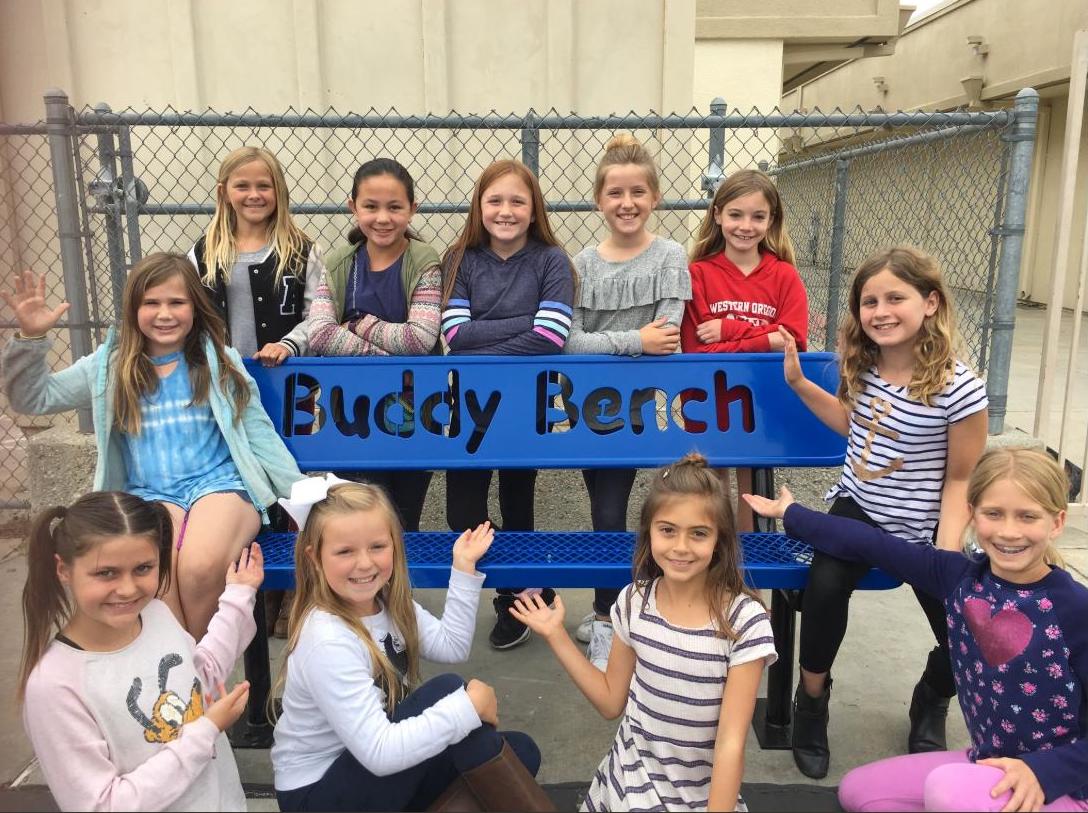 Students sitting on the bench are looking for a friend. If someone sees a classmate on the buddy bench, they ask them to play. The goal is to grow the circle of friends until everyone has someone to play with.

Last year, Troop 3672 raised funds to install the bench on the playground. Since faculty members filmed a video to describe how the bench worked, the bench has become effective as kids go over and make new friends, said Tijeras Creek Principal Diann Buckingham.

“I get compliments all the time from parents at our school who might be new and say, ‘The kids treat each other with respect,’ and that the kids are very kind,” Buckingham said. “I see kids all the time choosing to be kind to each other.”

Tijeras Creek staff talks to students about finding opportunities in showing kindness and not expecting a reward in return, Buckingham said.

Every week, students recite a pledge against bullying, and talk about the importance of becoming an upstander, a person who sticks up for a bullied victim by saying, “That’s not nice, why would you say that?”

“My job is to help them look at how their actions affect everyone and show them how to be kind,” Buckingham said. “Tijeras Creek scholars are respectful, kind and responsible. We say, ‘Be a Buddy and not a Bully,’ and it’s become the culture of our school – not just during a week.”

They demonstrate by their presence that education is important.

They are Watch D.O.G.S., (Dads of Great Students) – a group made up of fathers, grandfathers, uncles and other father-figures who volunteer for at least one day each year at their child’s/student’s school. 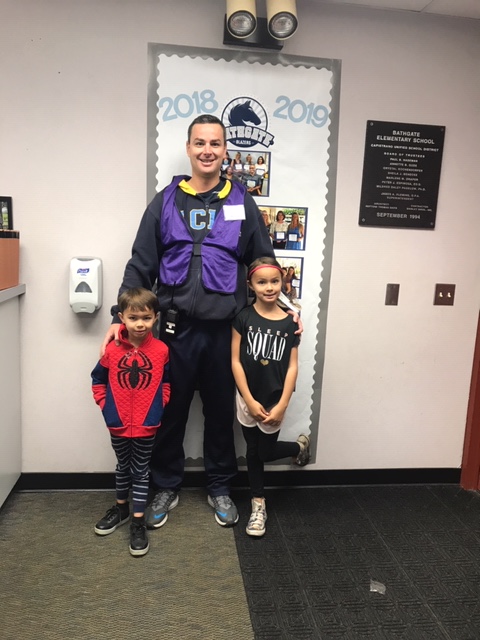 During the day, Watch D.O.G.S. read and work on flashcards with students, play at recess, eat lunch with students, patrol the school entrances and hallways, monitor the lunchroom, and assist with traffic flow. They also actively engage with not only their own students, but other students as well.

“It’s not just an element of security – it’s also a great way of having an extra pair of eyes on campus who encourage students to interact and have fun,” said Chris Doe, a Watch D.O.G. and father of two children at Bathgate Elementary School in Mission Viejo.

Mike Dodd, a retired fire captain with LAFD and father to two children at Bathgate, said being a Watch D.O.G. is an incredible experience as he is able to keep an eye on the school while protecting children. 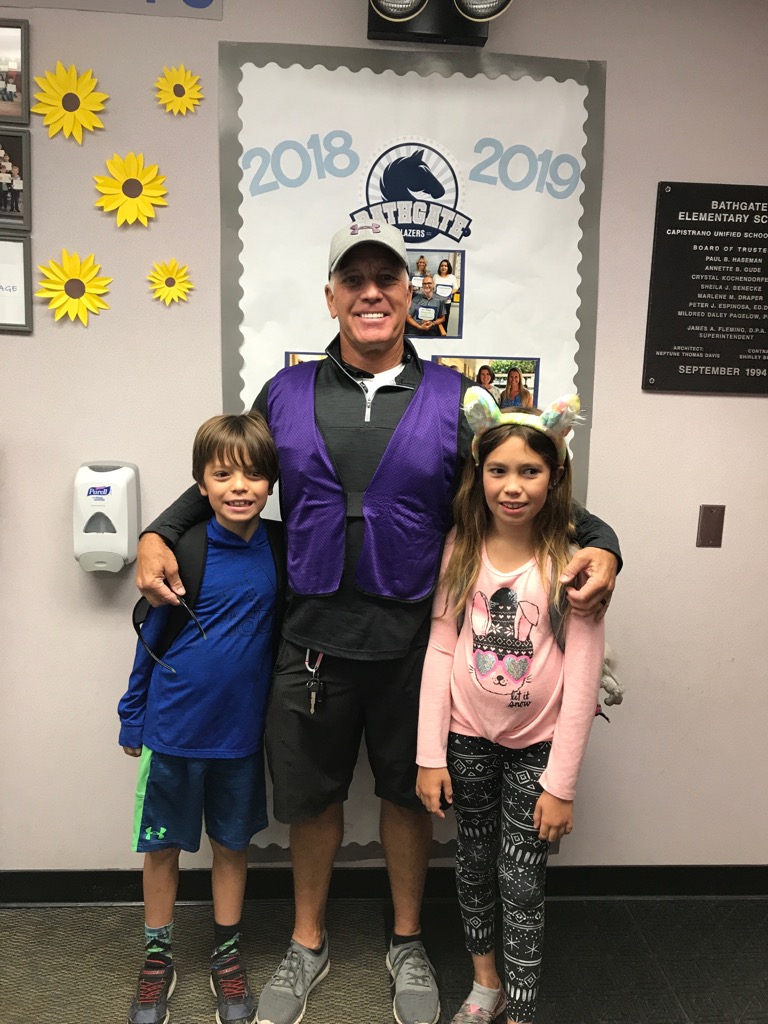 “The main thing that I really enjoy and stands out the most is how excited the kids are when you are there,” Dodd said. “Kids love it because they can interact with adults and it gives them one-on-one time where they can play and feel listened to.”

Dodd said there is no shortage of fathers participating in the program at Bathgate and many friendships are built with other dads who thank each other for keeping children safe. 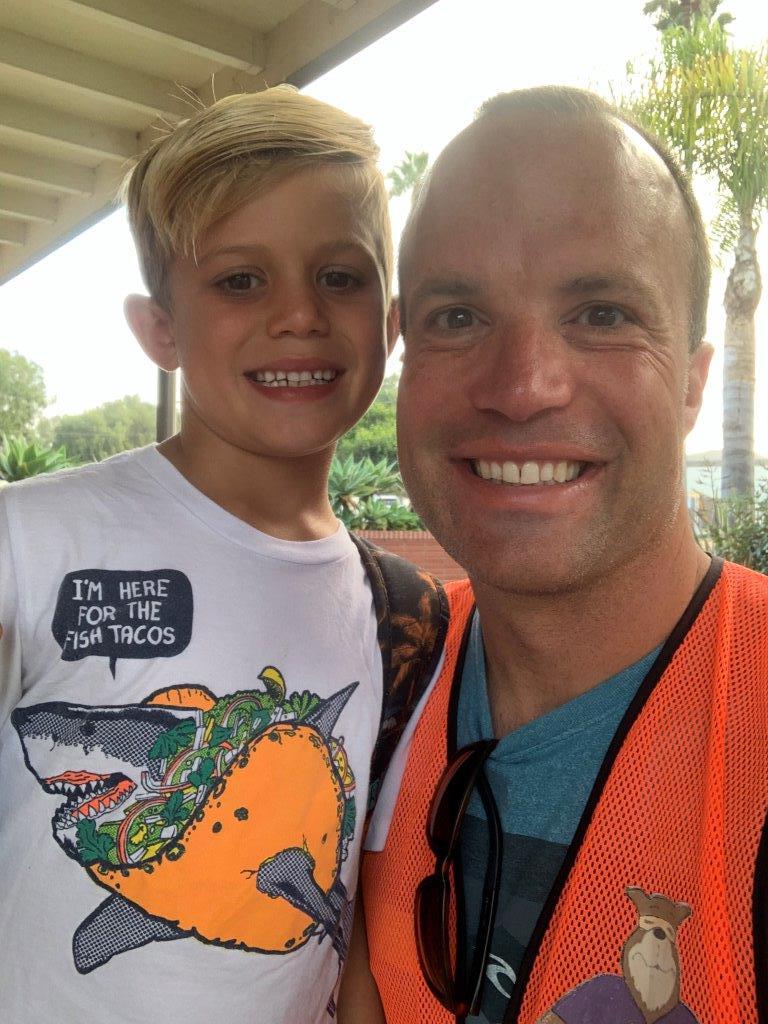 Many school principals have reported that the presence of a Watch D.O.G. dramatically reduces reports of bullying.

Concordia Elementary School Principal Rob McKane said the Watch D.O.G. program is in its second year on the San Clemente campus and is thriving. Ron Eckert is the school’s lead D.O.G. and helped coordinate a pizza night with other dads and their kids.

“The program is great, and our kids and families love it,” McKane said. 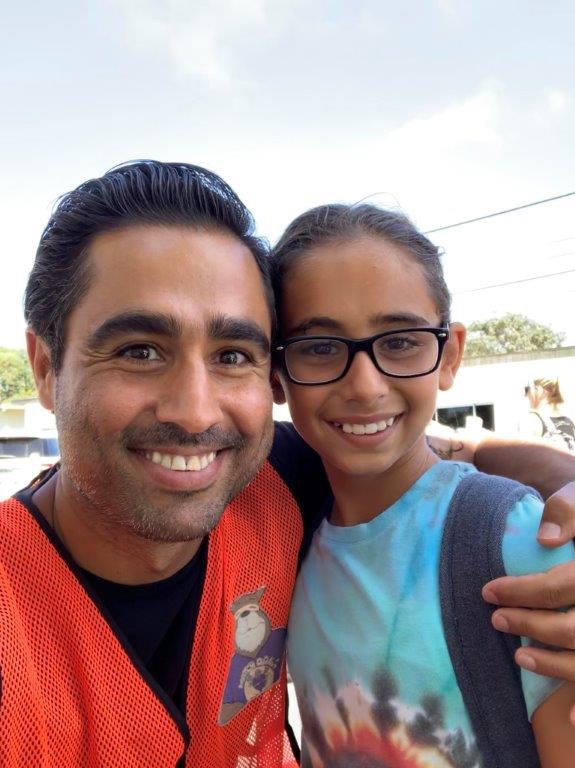 Oso Grande Elementary School in Ladera Ranch boasts a large Watch D.O.G. community with two to four dads volunteering time every day. The program has been on site for about four years and is currently run by parents Bret and Kari Berry. 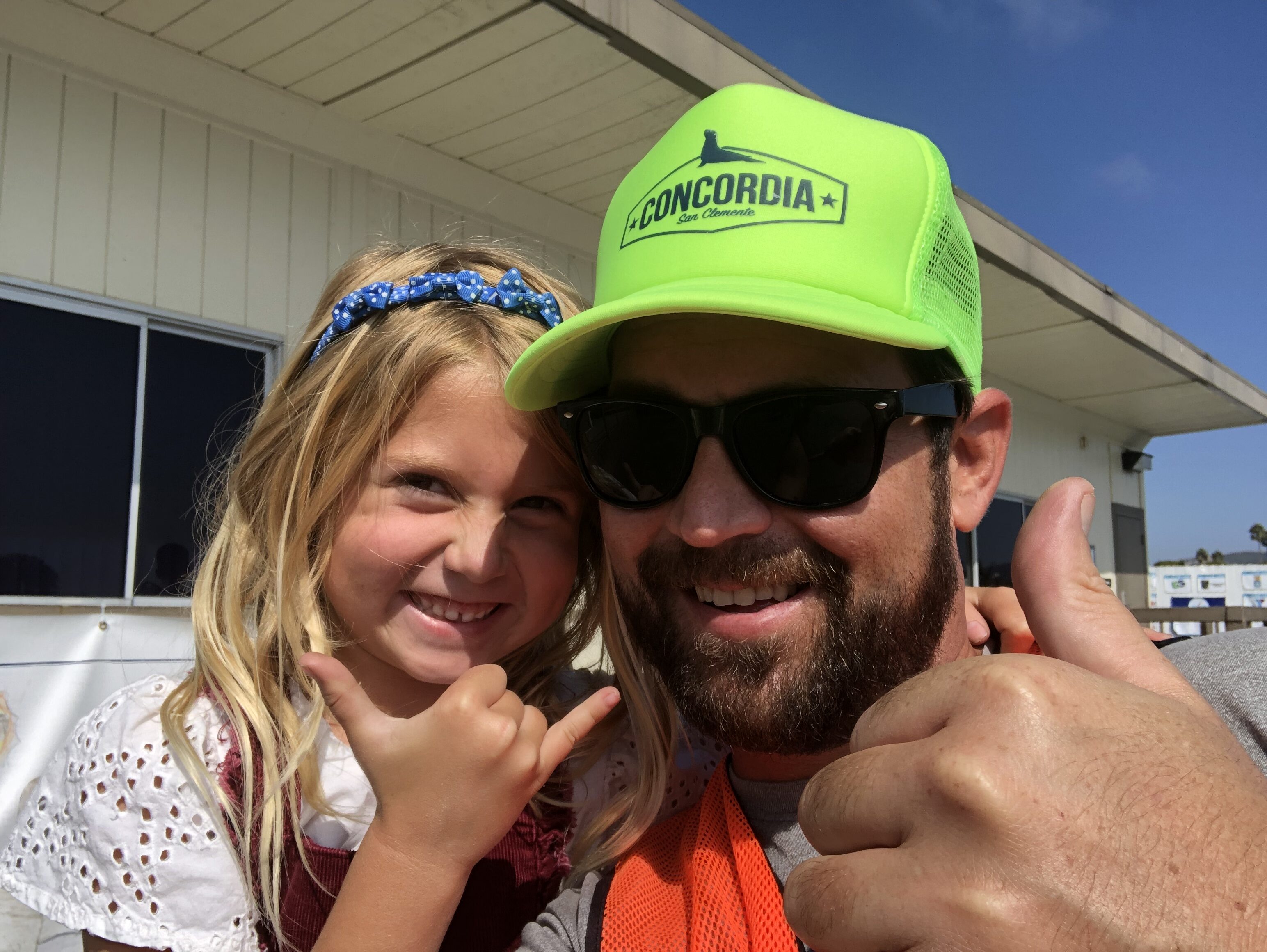 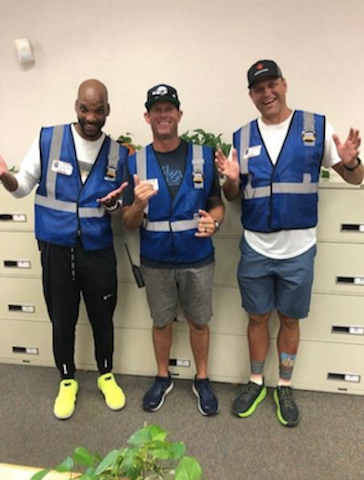 After a well-attended orientation night, all volunteer days were filled from October through May and the Vista del Mar PTA Safety Committee played a significant role in implementing the program. 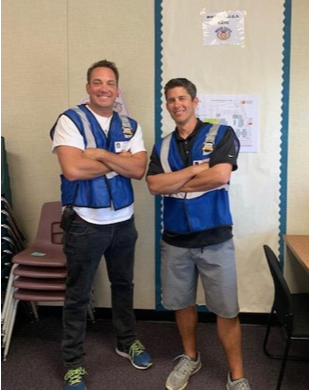 “We are proud to have male role models on campus providing us with an extra presence for safety as well as providing more adult interaction with our students,” Ernst said.

STANDING UP FOR OTHERS

Students sat in an “ONE” assembly with author Kathryn Otashi to discuss how one person can make a difference and promote kindness, and they had the option to read a bully prevention book or play optional videos in classrooms. Students also engaged in a “STOMP Bullying Out” activity during lunch and participated in a “Kind Hands” activity to write down one thing they can do to prevent bullying in school. 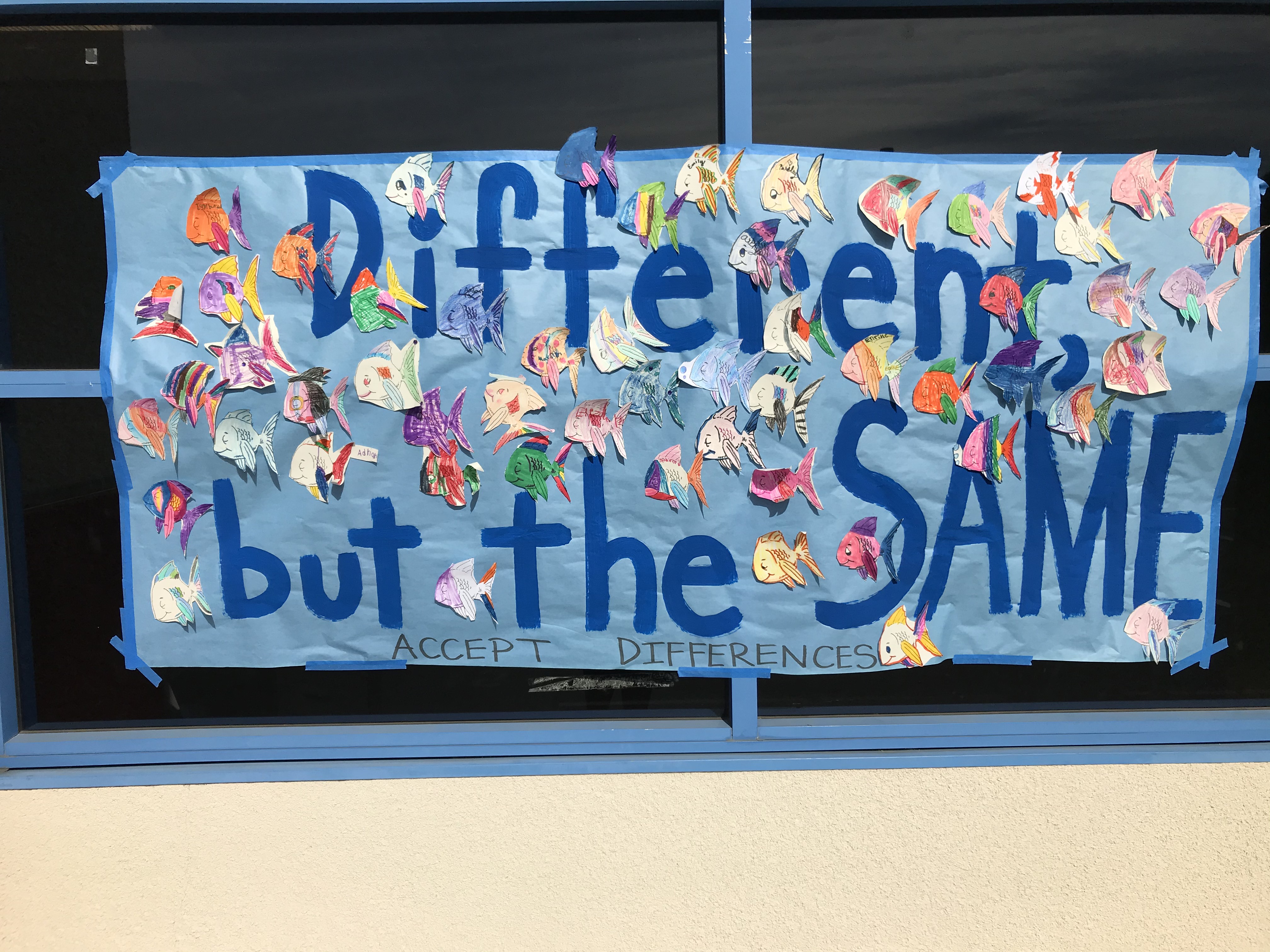 “We always like to promote kindness with the younger kids and educate them about what bullying is,” said Jenny Thai, school counselor at Hidden Hills and Las Flores elementary schools.

Thai said the primary focus as a school counselor is to promote positive and healthy behavior – an objective that runs year-round. Upstanders are the key to preventing bullying as they are the kids who make the biggest difference with helping the bullied students and reporting the action to an adult. 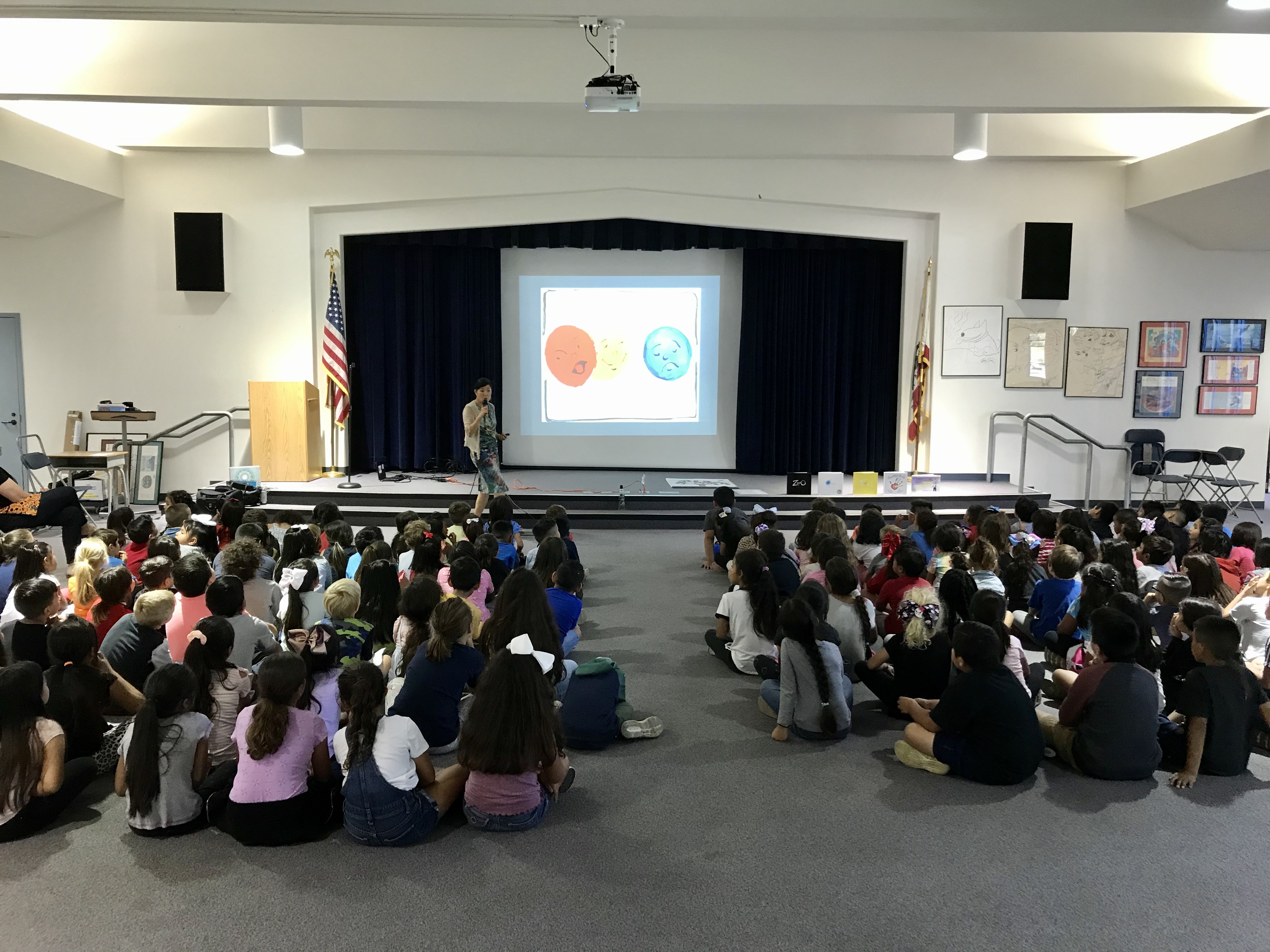 Counselors go into classrooms providing curriculum on a monthly basis that provides skills with coping to prevent students from bullying other students so that they have outlets, Thai said.

The schools also have participated in the Great Kindness Challenge, a national campaign where students have the opportunity to repeat kind act after kind act. 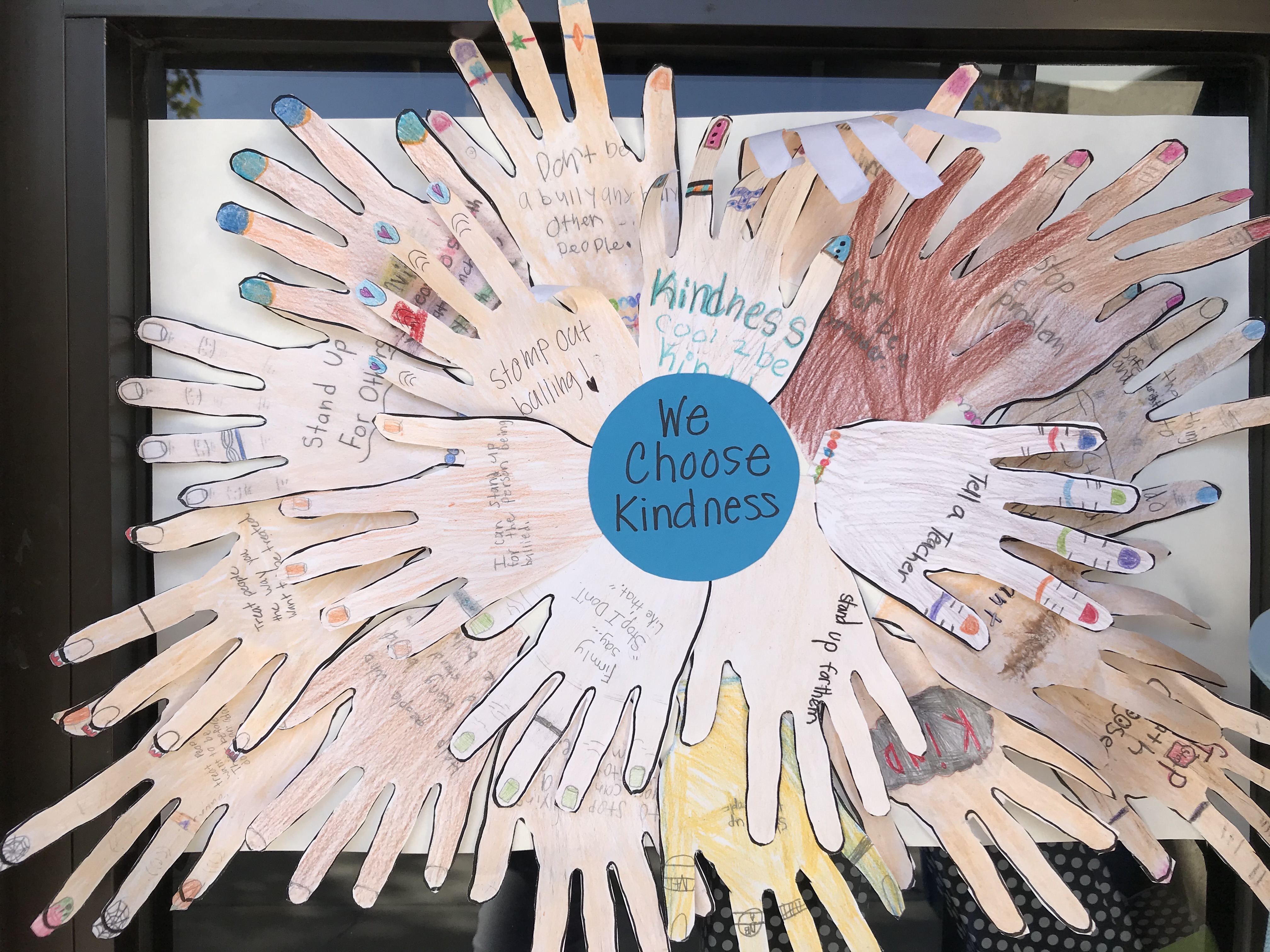 “My hope is that we come up with something meaningful for students to promote more kind acts at school and that they feel more comfortable on campus,” Thai said.

Bullying is unwanted, aggressive behavior among school-aged children that involves a real or perceived power imbalance. The behavior is repeated, or has the potential to be repeated, over time.

Bullying includes actions such as making threats, spreading rumors, attacking someone physically or verbally, and excluding someone from a group on purpose. Bullying can also take place through technology, known as cyberbullying. 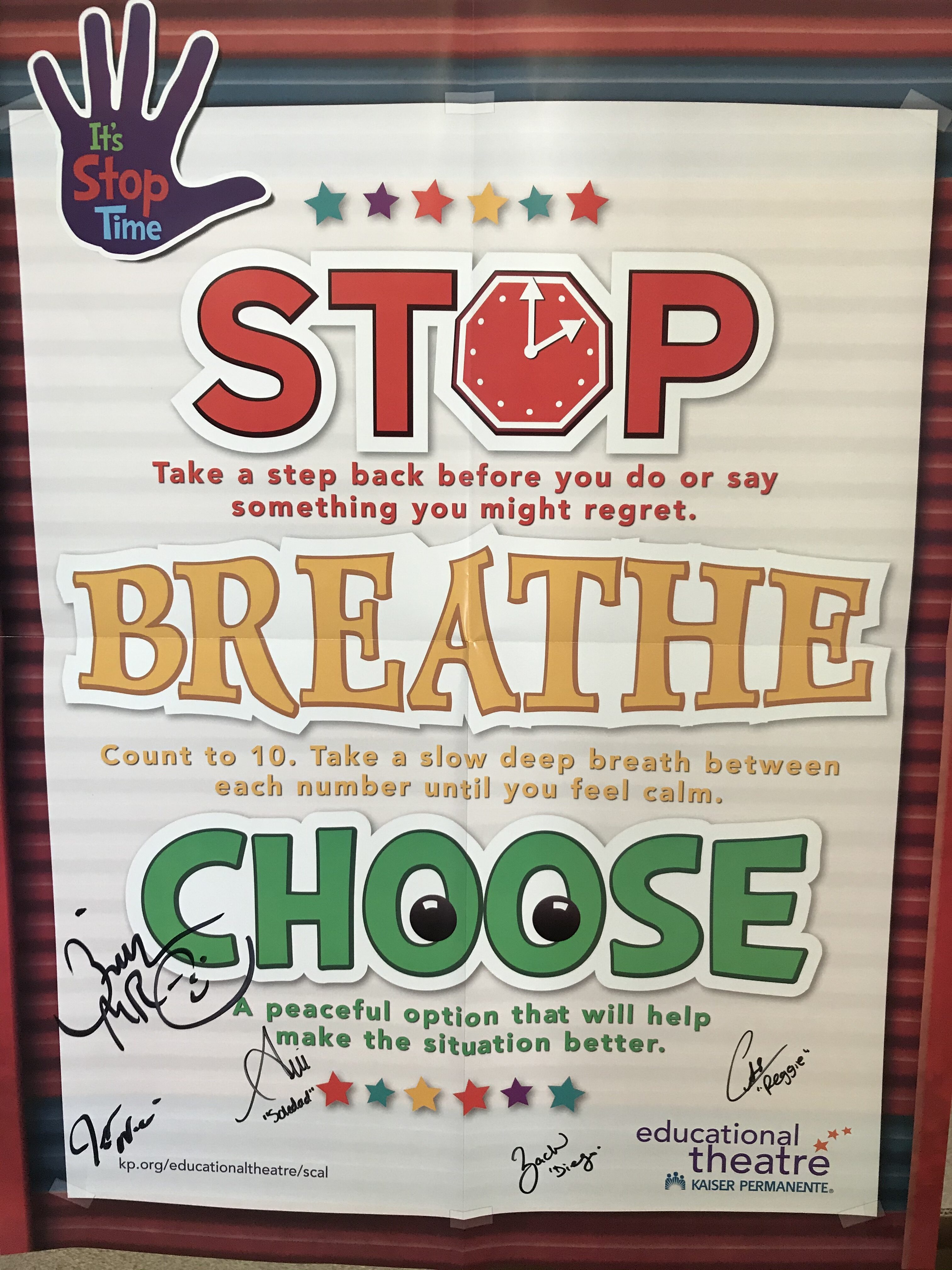 According to the National Center for Education Statistics and Bureau of Justice, about 20% of students ages 12-18 experienced bullying.

Stopbullying.gov reported that 30% of young people, who volunteered for surveys, admit to bullying others; 70.6% admit to witnessing bullying in their schools; 70.4% of school have staff have seen bullying; and 41% of school staff, who participated in surveys, witness bullying once a week or more. The site also indicates incidents of bullying end with 10 seconds 57% of the time when bystanders intervene.

October may be National Bullying Prevention Month, but the district’s efforts to stop bullying aren’t limited to just one month. Capistrano Unified schools and staff work year round to prevent bullying and increase awareness by teaching curriculum in the classroom, providing counseling support, and holding parent education events.

Schools teach behavioral expectations and Second Step Curriculum lessons with topics such as how to handle bullying and what to do if you see it, cyber-bullying, sexual harassment, being leaders and allies, working in groups, coping with stress, de-escalating a tense situation and calming strategies. Digital citizenship lessons are taught to students in grades K-12 with a focus on social media implications and guidance. CUSD is also the largest district in the U.S. to be Common Sense Certified.

School counselors (one at every school site) teach lessons on compassion and empathy, hold restorative circles regarding bullying, conduct conflict mediation, provide self-regulation group counseling, and meet individually with students that have been victimized by or participated in bullying to provide support and strategies. Students are also provided several ways to report bullying.

Presentations are regularly provided to parents on topics such as cyber safety, anti-drug education, and how to raise resilient kids. CUSD has recently partnered with Hoag Hospital to host a series of parent education nights titled “Helping Teens and Families Navigate Mental Health and Wellness.” The second event in the series is scheduled for Wednesday, November 13 at Aliso Niguel High School from 6-8 p.m. Topics will include identifying substance abuse disorders and the dangers of vaping.