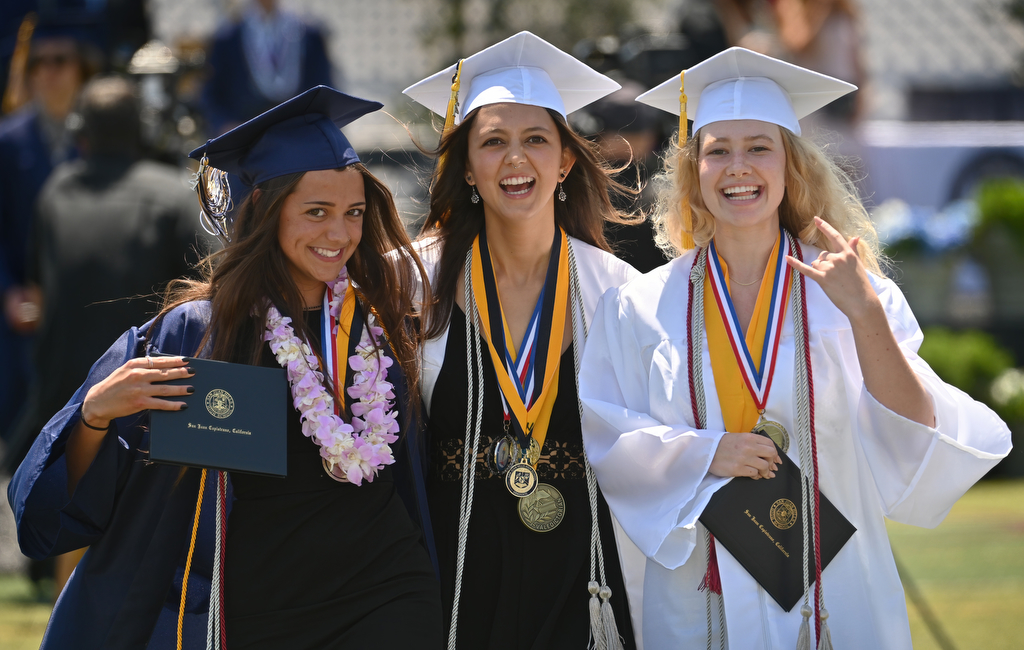 The students in the Class of 2021 are resilient.

It’s a theme that came up many times in discussions with San Juan Hills High School officials, and is one that the approximately 700 graduating seniors have proven time and again as they lived the senior year in a pandemic.

Despite the challenges of the pandemic, students did not see a downturn in achievement; instead, the students found success.

“In spite of (the pandemic),” said Principal Dr. Manoj Mahindrakar, “we’re going to end on the field where they’re supposed to be with them getting their diplomas like they planned on and we hoped for.”

“We got through collectively,” Mahindrakar said. “They’re not there on the field alone.”

San Juan Hills High School student athelets made it to CIF playoffs and won league championships — some for the first time in the school’s history, he said. The school administered over 2,100 AP exams. Students in the AVID program received the largest number of grants and scholarships in the school’s history.

The school’s Academic Decathlon team went to the state competition for the first time in school history. Teachers provided more hours of in person tutoring than ever before. The Drama program built outdoor stages and lighting to put on musicals and productions with an audience.

“You wouldn’t think we’d be growing in the midst of a pandemic, but we did,” Mahindrakar said. “We never gave up on the opportunities as they presented themselves.”

This year’s senior awards ceremony was held outdoors for the first time in history. With the sunset at their backs to symbolize the sunsetting of the senior year, students and parents enjoyed a beautiful setting for the year’s awards.

“Nothing stopped this year,” he said. “The question was always ‘How can we? What can we do to get there?’”

This year, as it did last year, the City is throwing a parade in downtown San Juan Capistrano to celebrate the graduates. A senior carnival held by the school gave the students a fun environment to enjoy carnival rides, hypnotists, food trucks and more on campus. The school held a traditional senior brunch in honor of the Class of 2021 as well.

For the third year, the school also honored about 50 students who are the first generation high school graduates or first going on to a college or university in their families.

“There were obstacles and the support crested the obstacles in almost every circumstance. Our parents, our community, our kids, our teachers did that,” Mahindrakar said.