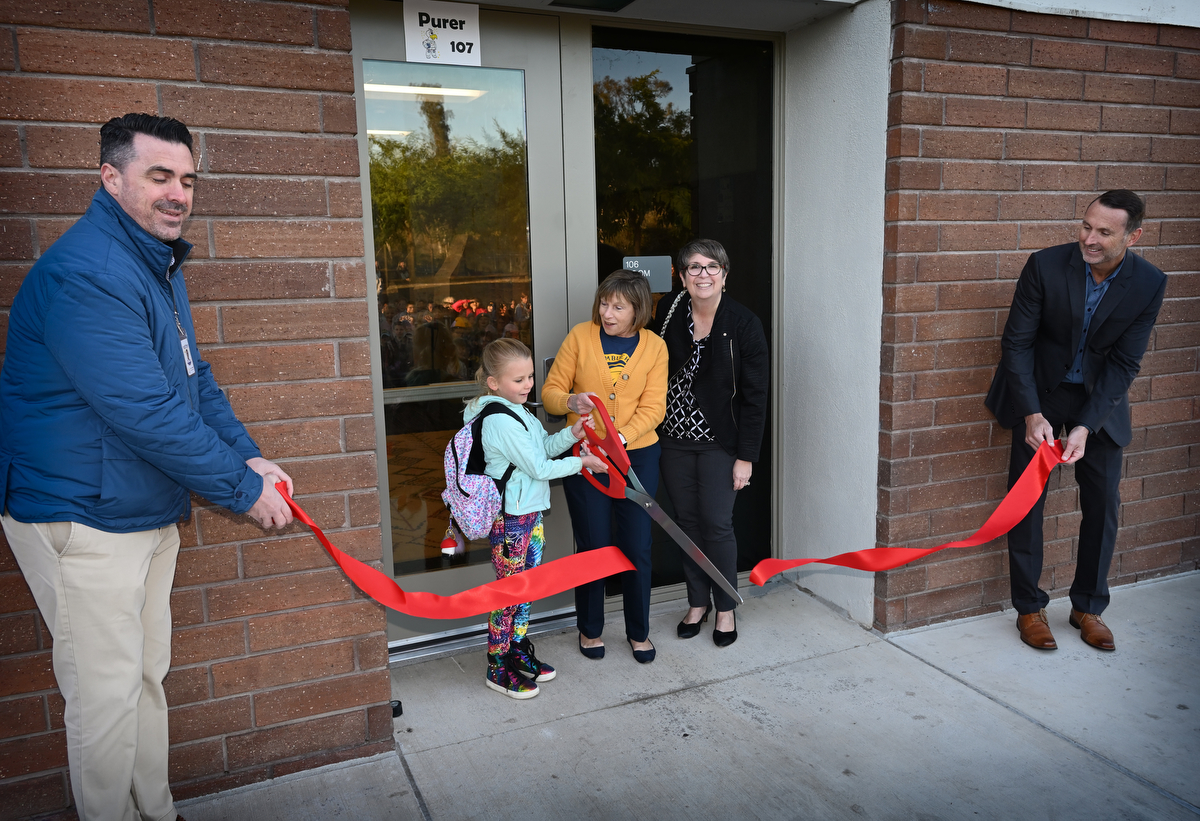 “We’re saying goodbye to the 1900s,” exclaimed Principal Antoinette McManigal, who has been watching the evolution of the K-5 school that was built in 1977.

The recent ribbon cutting was the second at the school. In 2019, the first ribbon cutting commemorated mostly outdoor work, as well as a number of interior, but not necessarily visible, upgrades. The bulk of the interior redesign was commemorated at the event Friday morning. McManigal, who has been principal for four years, joked about her tenure at the school that, “construction has been my world.”

Prior to the school’s makeover, it was pure 1970s. At the time, the open education movement was all the rage with individual classrooms replaced by large open spaces. In theory, the open concept would foster creativity, although critics say what evolved was more chaotic than creative.

Since its heyday, the open concepts have gone the way of the Ford Pinto and traditional designs are back. Ambuehl was pure 70s chic, all the way from its open floor plan with a loft, to brown-green carpeting and burnt-orange cabinets and counters. All that remains of the look are the countertops in the teachers’ kitchen, and they’re coming out any day now. The ribbon cutting was to acknowledge the near total transformation of the school.

“It has turned into a 21st century learning environment,” said Kirsten Vital Brulte, Superintendent of the Capistrano Unified School District.

The approximately $5 million project came in “on time and under budget,” according to Vital Brulte. The update added permanent walls to separate the classes. Each classroom is now equipped with new ceiling grids and lighting, large projection screens with overhead projectors, whiteboards and added storage.

“The most awesome part is there is space for group and collaborative work,” said McManigal.

By walling in rooms and eliminating pass-through space, classrooms and teaching space were expanded. Also new and upgraded are the school intercom and speakers and the bell system.

“I think we did a good job of capturing the vision of what they wanted,” said Daniel Clem, Director at TELACU Construction Management, project supervisor.

The ribbon cutting was held outdoors on a chilly morning before the student body and a gathering of about 70 parents. After the ribbon was cut, to wild applause from the children, school officials and dignitaries retired indoors, where a slide show of the renovation was given along with tours of the classrooms.

In an open area near the front office, McManigal described how adult visitors had to duck to enter the area due to the since-removed loft. Improvements and modernization at the school began in 2019 with replacement of the school’s heating, ventilation and air conditioning systems. There were also improvements to the playground play area, replacement of the blacktop and installation of a shade structure and new fencing.

Inside improvements had been made to restrooms and fire alarms, including adding automated doors, Americans with Disabilities Act compliance, and reconfiguring of the library.

The project was undertaken in the wake of a 2017 districtwide assessment of the condition of the schools’ facilities. The work was funded from the sale of Whispering Hills and Mello-Roos facilities district bonds and included mandatory improvements from the Division of State Architect.