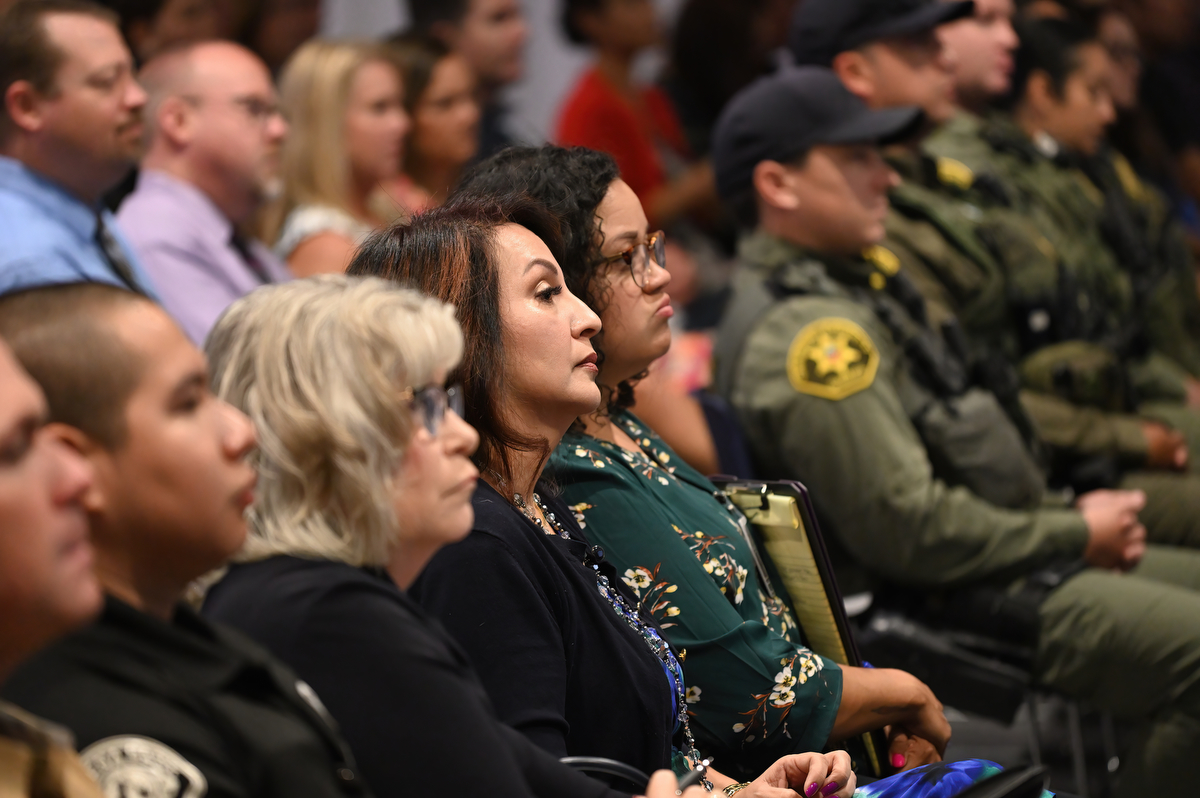 The illuminating half-day session, held at the Orange County Sheriff’s Regional Training Academy in Tustin, focused on how to monitor, assess, and intervene against all these issues.

The event included presentations and remarks by representatives from the FBI, OC District Attorney’s Office, and Orange County Department of Education.

Michael Beekman, Executive Director of Safety and Student Services for CUSD, said it is particularly important for school officials, especially newer administrators, to be aware of the variety and scope of resources available to them.

Beekman attended the event with a new assistant principal in Capistrano Unified.

“I know for her it was eye opening,” he said.

School safety meetings, summits, and conferences, such as the recent 13th annual Safe Schools Conference in Garden Grove, have become more common throughout the country. However, the ongoing spate of school violence, notably the shootings in Uvalde, Texas, highlights the need for constant vigilance, education and intervention.

According to officials at the summit, Orange County is at the forefront and is a national model for its efforts to stave off school violence through communication and intervention.

“What can we do as a nation?” said Orange County Sheriff Don Barnes. “I can say that you look no further than what we are doing currently in Orange County to know how to develop response protocol, intervention strategies and plans to keep our schools safe so kids can learn and teachers can teach.”

In 2018, the Orange County School Threat Assessment Team (OCSTAT) was established to reduce school violence by sharing concerns about students whose behavior was cause for concern and working on strategies to head off problems.

Speaking about OCSTAT, Beekman said, “(CUSD) was the first district to go through it and we had all our administrators and mental health personnel go through it.”

Barnes also spoke of the Orange County School Mobile Assessment and Resource Team, or SMART, formed in 2000 and intended to respond to and resolve safety concerns before they escalate.

“I will tell you, over the years we have intervened and interrupted Columbine-like plans,” he said, referring to the 1999 mass shooting and bombing attempt in Colorado where 12 students and a teacher were killed. “We have removed bomb-making materials out of kids’ bedrooms, we have taken guns, we’ve (helped) kids with behavioral health issues into treatment to help keep them and their schools safe. And, more important, get them back on track where they can be productive rather than criminal.”

During the forum, it was also mentioned that since 2018, every public school in California has been required to have a Comprehensive School Safety Plan. These plans, updated annually, are meant to handle campus risks, prepare for emergencies, and promote safe and secure learning environments.

Also on hand at the School Safety Summit was the Orange County Intelligence Assessment Center, or OCIAC, which collects and analyzes potential terrorist, crime, and public safety threats through information-gathering from a vast array of sources and sharing it with the public and government agencies.

Orange County District Todd Spitzer lauded OCIAC, calling it the “center of the hub” of information-sharing in the county.

OCIAC Director Alberto Martinez said that developing personal relationships with other health and safety professionals is as important as sharing information online. One of the worst outcomes, Martinez said, is for a crisis to arise and for the people responding to be meeting for the first time.

CUSD’s Beekman agreed, saying he is looking forward to renewing relationships and introducing his assistant principal to colleagues in public safety.